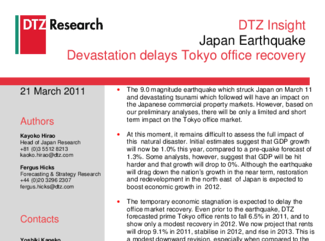 The 9.0 magnitude earthquake which struck Japan on March 11 and devastating tsunami which followed will have an impact on the Japanese commercial property markets. However, based on our preliminary analyses, there will be only a limited and short term impact on the Tokyo office market.

At this moment, it remains difficult to assess the full impact of this natural disaster. Initial estimates suggest that GDP growth will now be 1.0% this year, compared to a pre-quake forecast of 1.3%. Some analysts, however, suggest that GDP will be hit harder and that growth will drop to 0%. Although the earthquake will drag down the nation’s growth in the near term, restoration and redevelopment in the north east of Japan is expected to boost economic growth in 2012.