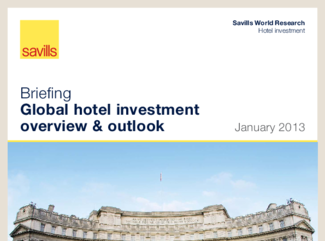 - Cross border investment in the US, UK and Asia Pacific hotel markets was a key feature in 2012. In the case of the US and UK markets investment was largely focused on trophy assets.

- Manhattan led the US hotelinvestment market last year with sales volume totaling US$2,8 billion (US$587,595 per room).

- UK 2012 hotel investment volumes were relatively resilient at US$2,6 billion. This was driven by activity in London as investors focused their attention on prime hotels in the face of weakening UK economic performance and the continuation of the Eurozone crisis.

- Asian cap rates increased slightly in the last quarter of 2012; however, yields remain more compressed than in western markets. An average yield of 5.8% for prime assets was recorded in 2012, which is the lowest for years.