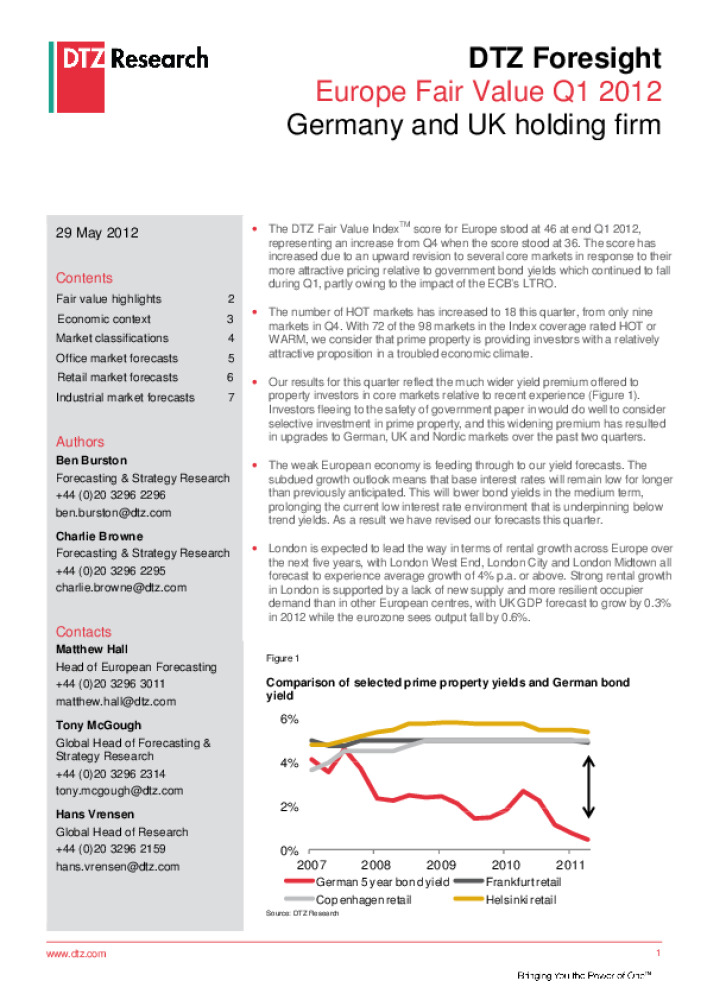 The DTZ Fair Value Index TM score for Europe stood at 46 at end Q1 2012, representing an increase from Q4 when the score stood at 36. The score has increased due to an upward revision to several core markets in response to their more attractive pricing relative to government bond yields which continued to fall during Q1, partly owing to the impact of the ECB’s LTRO.
The number of HOT markets has increased to 18 this quarter, from only nine markets in Q4. With 72 of the 98 markets in the Index coverage rated HOT or WARM, we consider that prime property is providing investors with a relatively attractive proposition in a troubled economic climate.
Our results for this quarter reflect the much wider yield premium offered to property investors in core markets relative to recent experience.
Investors fleeing to the safety of government paper in would do well to consider selective investment in prime property, and this widening premium has resulted in upgrades to German, UK and Nordic markets over the past two quarters.
The weak European economy is feeding through to our yield forecasts. The subdued growth outlook means that base interest rates will remain low for longer than previously anticipated. This will lower bond yields in the medium term, prolonging the current low interest rate environment that is underpinning below
trend yields. As a result we have revised our forecasts this quarter. London is expected to lead the way in terms of rental growth across Europe over the next five years, with London West End, London City and London Midtown all forecast to experience average growth of 4% p.a. or above. Strong rental growth in London is supported by a lack of new supply and more resilient occupier demand than in other European centres, with UK GDP forecast to grow by 0.3% in 2012 while the eurozone sees output fall by 0.6%.

Time to overweight real estate - The case for property in 2012