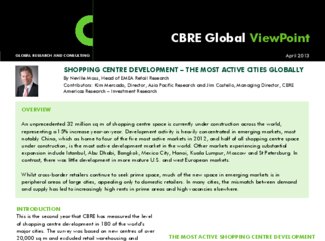 An unprecedented 32 million sq m of shopping centre space is currently under construction across the world, representing a 15% increase year-on-year. Development activity is heavily concentrated in emerging markets, most notably China, which as home to four of the five most active markets in 2012, and half of all shopping centre space under construction, is the most active development market in the world. Other markets experiencing substantial expansion include Istanbul, Abu Dhabi, Bangkok, Mexico City, Hanoi, Kuala Lumpur, Moscow and St Petersburg. In contrast, there was little development in more mature U.S. and west European markets.

Whilst cross-border retailers continue to seek prime space, much of the new space in emerging markets is in peripheral areas of large cities, appealing only to domestic retailers. In many cities, the mismatch between demand and supply has led to increasingly high rents in prime areas and high vacancies elsewhere. 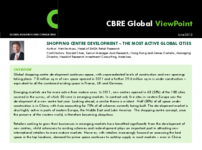