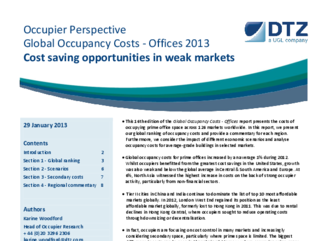 This 16th edition of the Global Occupancy Costs - Offices report presents the costs of occupying prime office space across 126 markets worldwide. In this report, we present our global ranking of occupancy costs and provide a commentary for each region. Furthermore, we consider the impact of different economic scenarios and analyse occupancy costs for average-grade buildings in selected markets.

Global occupancy costs for prime offices increased by an average 1% during 2012. Whilst occupiers benefitted from the greatest cost savings in the United States, growth was also weak and below the global average in Central & South America and Europe. At 6%, North Asia witnessed the highest increase in costs on the back of strong occupier activity, particularly from non-financial sectors.

Tier II cities in China and India continue to dominate the list of top 10 most affordable markets globally. In 2012, London West End regained its position as the least affordable market globally, formerly lost to Hong Kong in 2011. This was due to rental declines in Hong Kong Central, where occupiers sought to reduce operating costs through downsizing or decentralisation.

In fact, occupiers are focusing on cost control in many markets and increasingly considering secondary space, particularly where prime space is limited. The biggest difference in costs can be seen in Shanghai and Moscow, where occupying prime space costs over 100% more than taking space in an average grade building.

Under the base case scenario, we expect rents to increase by 2.3% over the next two years, with occupiers in Asia Pacific expected to witness the highest growth rate. Across the five most affordable markets globally, the impact of the downside scenario is most significant for the Indian markets in the short term (2013-2014). Looking at the five least affordable markets, occupiers in Tokyo will be challenged by strong growth in rents under all three scenarios, whereas rents in Zurich will remain largely unchanged.