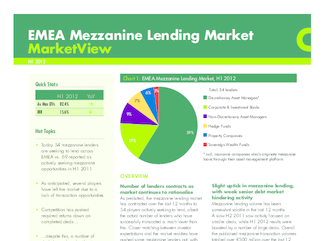 As predicted, the mezzanine lending market has contracted over the last 12 months to 54 players actively seeking to lend, albeit the actual number of lenders who have successfully transacted is much lower than this. Closer matching between investor expectations and the market realities have pushed some mezzanine lenders out, with several players reverting back to direct equity investment strategies. CBRE expects the market to further rationalise over the course of 2012/2013.

The average maximum LTV lenders are willing to provide has remained stable at 82.4% (H1 2011: 82.8%). Lenders remain confident in offering higher-leveraged loans to borrowers, in some cases up to 90% LTV secured against good quality assets. However, in reality the majority of mezzanine loans deployed in the last year have been at lower LTV levels. At the same time, return requirements have fallen slightly to an average of 15.6% (H1 2011: 15.9%). Market evidence suggests a growing number of deals to have closed at a lower pricing level.