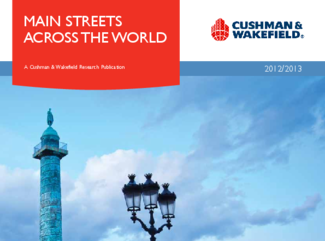 Despite a backdrop of a slower global economy and continued uncertainty surrounding the euro zone, prime retail rents were generally resilient over the year to June 2012. An expansion of 4.5% provided for a largely unchanged and positive growth picture; with rents rising in 147 of the 326 locations surveyed, but declining in 49.

Rental uplift was again driven by the strong performance in the Americas and Asia Pacific; however, it was the former region which registered the largest expansion (10.9%). Alongside emerging South American markets – which continued to benefit from higher incomes and increasing retailer demand despite less benign economic conditions – rises in North American locations had a stronger impact than last year.

Notwithstanding a slight deceleration in the regional growth rate (8.6%), occupier activity in Asia Pacific remained buoyant. Retailers continued to compete for the limited prime space in the most coveted destinations of Hong Kong, India and South Korea, and the region was home to five of the top 10 most expensive global locations. Unsurprisingly, euro zone markets suffered from the economic slowdown and weak retail sales, and a similar trend was also evident in some Eastern European countries. Nevertheless, EMEA prime values were up by 1.7% in June on the same period last year, often boosted by requirements from luxury brands.