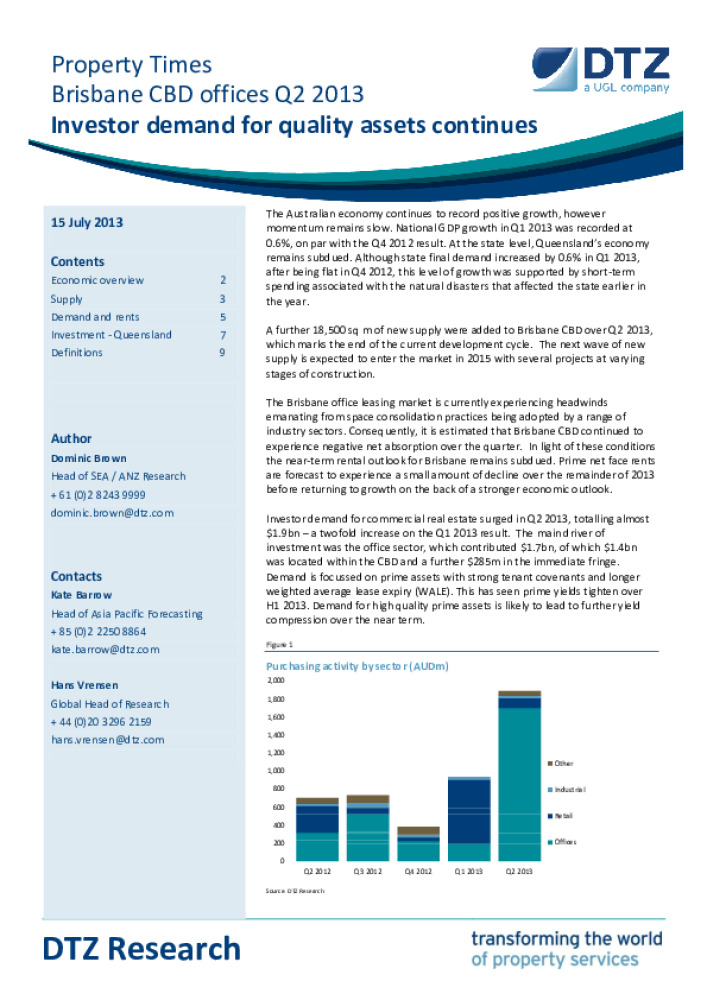 The Australian economy continues to record positive growth, however momentum remains slow. National GDP growth in Q1 2013 was recorded at 0.6%, on par with the Q4 2012 result. At the state level, Queensland’s economy remains subdued. Although state final demand increased by 0.6% in Q1 2013, after being flat in Q4 2012, this level of growth was supported by short-term spending associated with the natural disasters that affected the state earlier in the year.

A further 18,500 sq m of new supply were added to Brisbane CBD over Q2 2013, which marks the end of the current development cycle. The next wave of new supply is expected to enter the market in 2015 with several projects at varying stages of construction.
The Brisbane office leasing market is currently experiencing headwinds emanating from space consolidation practices being adopted by a range of industry sectors. Consequently, it is estimated that Brisbane CBD continued to experience negative net absorption over the quarter. In light of these conditions the near-term rental outlook for Brisbane remains subdued. Prime net face rents are forecast to experience a small amount of decline over the remainder of 2013 before returning to growth on the back of a stronger economic outlook.

Investor demand for commercial real estate surged in Q2 2013, totalling almost $1.9bn – a twofold increase on the Q1 2013 result. The main driver of investment was the office sector, which contributed $1.7bn, of which $1.4bn was located within the CBD and a further $285m in the immediate fringe. Demand is focussed on prime assets with strong tenant covenants and longer weighted average lease expiry (WALE). This has seen prime yields tighten over H1 2013. Demand for high quality prime assets is likely to lead to further yield compression over the near term.