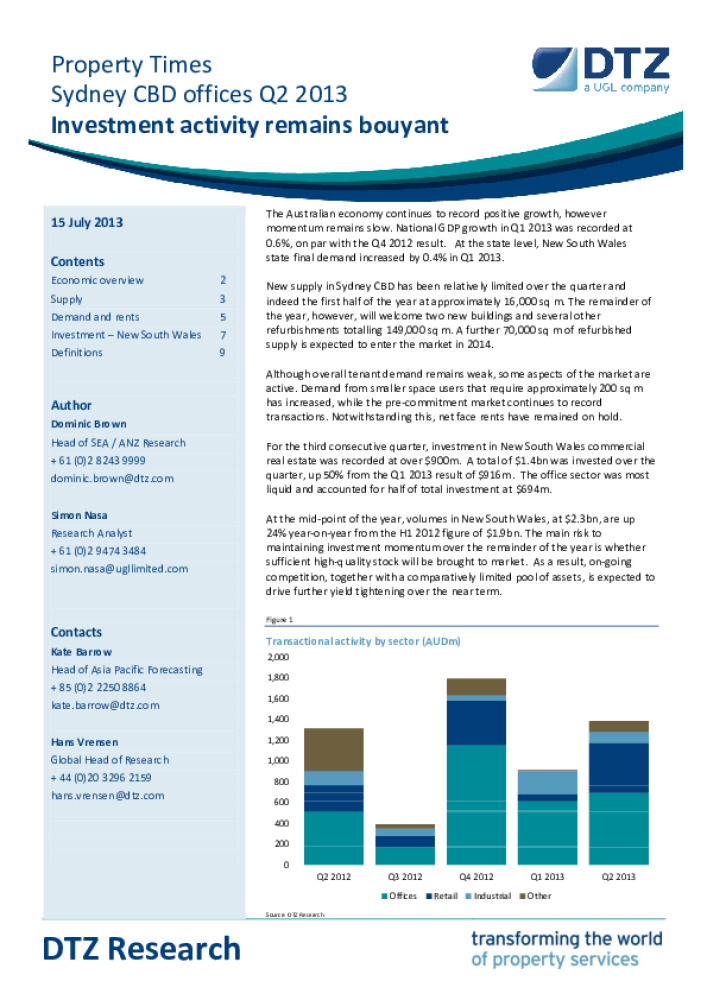 The Australian economy continues to record positive growth, however momentum remains slow. National GDP growth in Q1 2013 was recorded at 0.6%, on par with the Q4 2012 result. At the state level, New South Wales state final demand increased by 0.4% in Q1 2013.

New supply in Sydney CBD has been relatively limited over the quarter and indeed the first half of the year at approximately 16,000 sq m. The remainder of the year, however, will welcome two new buildings and several other refurbishments totalling 149,000 sq m. A further 70,000 sq m of refurbished supply is expected to enter the market in 2014.

Although overall tenant demand remains weak, some aspects of the market are active. Demand from smaller space users that require approximately 200 sq m has increased, while the pre-commitment market continues to record transactions. Notwithstanding this, net face rents have remained on hold.

For the third consecutive quarter, investment in New South Wales commercial real estate was recorded at over $900m. A total of $1.4bn was invested over the quarter, up 50% from the Q1 2013 result of $916m. The office sector was most liquid and accounted for half of total investment at $694m.

At the mid-point of the year, volumes in New South Wales, at $2.3bn, are up 24% year-on-year from the H1 2012 figure of $1.9bn. The main risk to maintaining investment momentum over the remainder of the year is whether sufficient high-quality stock will be brought to market. As a result, on-going competition, together with a comparatively limited pool of assets, is expected to drive further yield tightening over the near term.