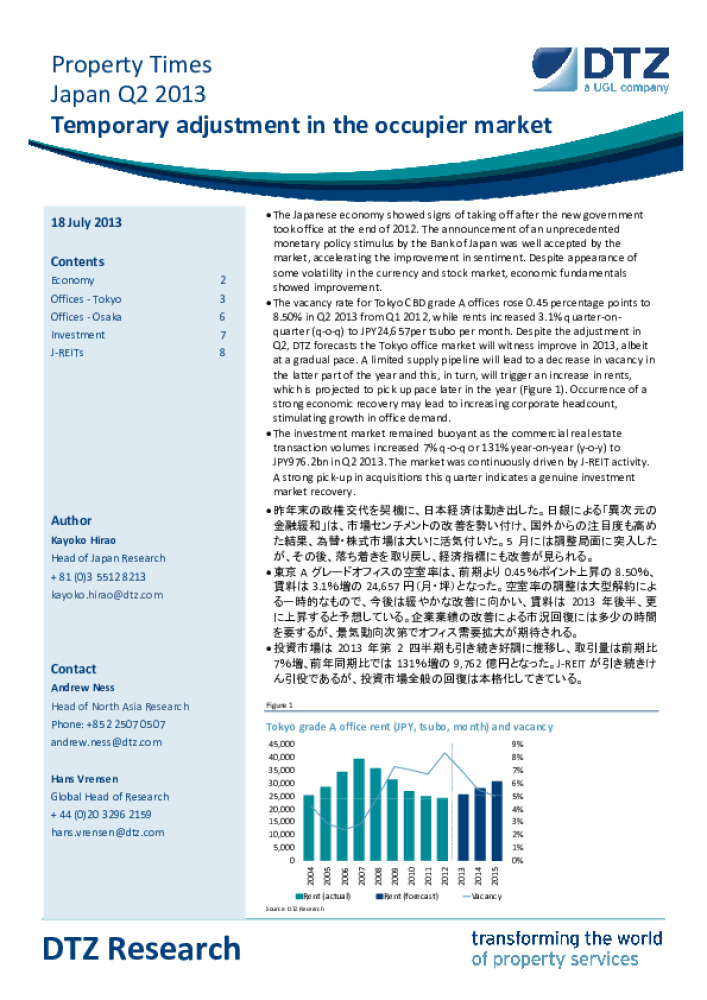 The Japanese economy showed signs of taking off after the new government took office at the end of 2012. The announcement of an unprecedented monetary policy stimulus by the Bank of Japan was well accepted by the market, accelerating the improvement in sentiment. Despite appearance of some volatility in the currency and stock market, economic fundamentals showed improvement.

The vacancy rate for Tokyo CBD grade A offices rose 0.45 percentage points to 8.50% in Q2 2013 from Q1 2012, while rents increased 3.1% quarter‐onquarter (q‐o‐q) to JPY24,657per tsubo per month. Despite the adjustment in Q2, DTZ forecasts the Tokyo office market will witness improve in 2013, albeit at a gradual pace. A limited supply pipeline will lead to a decrease in vacancy in the latter part of the year and this, in turn, will trigger an increase in rents, which is projected to pick up pace later in the year. Occurrence of a strong economic recovery may lead to increasing corporate headcount, stimulating growth in office demand.

The investment market remained buoyant as the commercial real estate transaction volumes increased 7% q‐o‐q or 131% year‐on‐year (y‐o‐y) to JPY976.2bn in Q2 2013. The market was continuously driven by J‐REIT activity. A strong pick‐up in acquisitions this quarter indicates a genuine investment market recovery.