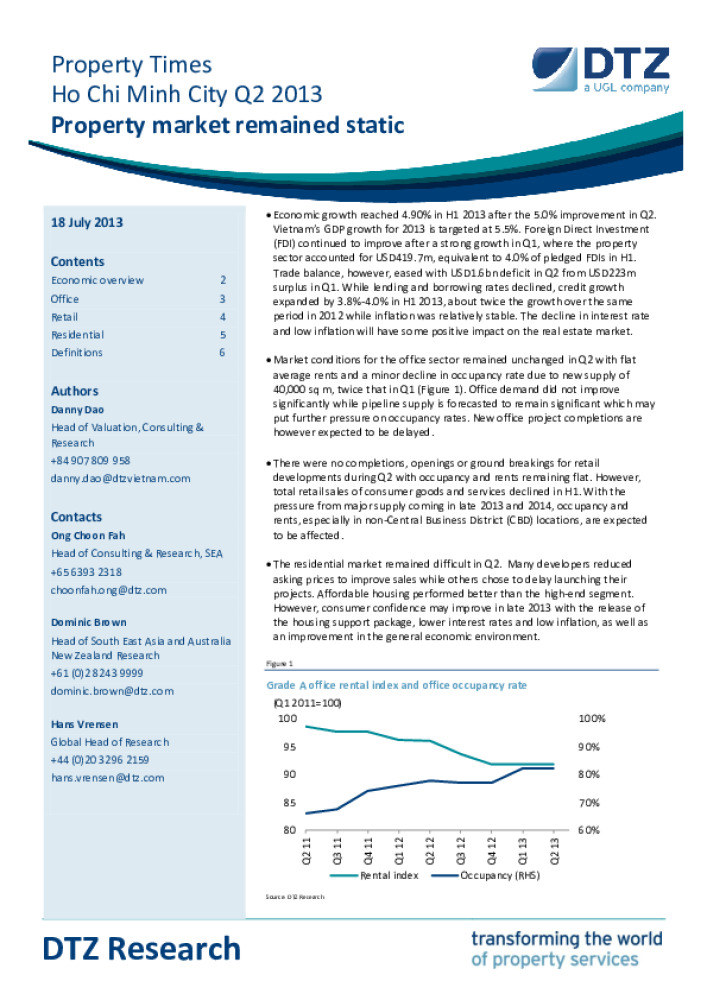 Economic growth reached 4.90% in H1 2013 after the 5.0% improvement in Q2. Vietnam’s GDP growth for 2013 is targeted at 5.5%. Foreign Direct Investment (FDI) continued to improve after a strong growth in Q1, where the property sector accounted for USD419.7m, equivalent to 4.0% of pledged FDIs in H1. Trade balance, however, eased with USD1.6bn deficit in Q2 from USD223m surplus in Q1. While lending and borrowing rates declined, credit growth expanded by 3.8%-4.0% in H1 2013, about twice the growth over the same period in 2012 while inflation was relatively stable. The decline in interest rate and low inflation will have some positive impact on the real estate market.

Market conditions for the office sector remained unchanged in Q2 with flat average rents and a minor decline in occupancy rate due to new supply of 40,000 sq m, twice that in Q1 (Figure 1). Office demand did not improve significantly while pipeline supply is forecasted to remain significant which may put further pressure on occupancy rates. New office project completions are however expected to be delayed.

There were no completions, openings or ground breakings for retail developments during Q2 with occupancy and rents remaining flat. However, total retail sales of consumer goods and services declined in H1. With the pressure from major supply coming in late 2013 and 2014, occupancy and rents, especially in non-Central Business District (CBD) locations, are expected to be affected.

The residential market remained difficult in Q2. Many developers reduced asking prices to improve sales while others chose to delay launching their projects. Affordable housing performed better than the high-end segment. However, consumer confidence may improve in late 2013 with the release of the housing support package, lower interest rates and low inflation, as well as an improvement in the general economic environment.