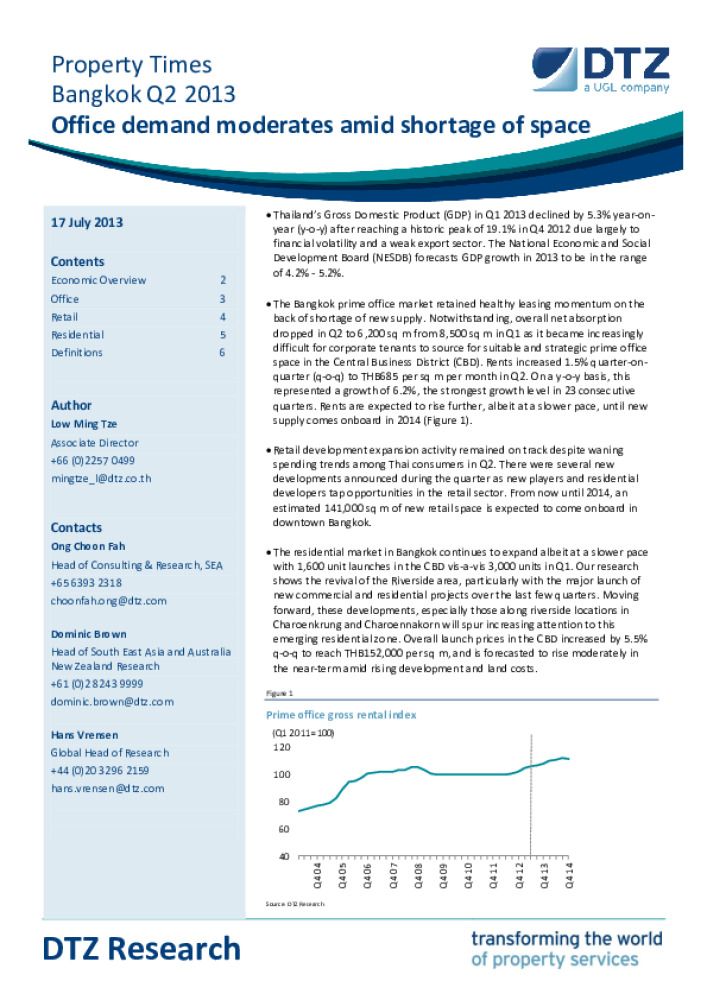 The Bangkok prime office market retained healthy leasing momentum on the back of shortage of new supply. Notwithstanding, overall net absorption dropped in Q2 to 6,200 sq m from 8,500 sq m in Q1 as it became increasingly difficult for corporate tenants to source for suitable and strategic prime office space in the Central Business District (CBD). Rents increased 1.5% quarter-on-quarter (q-o-q) to THB685 per sq m per month in Q2. On a y-o-y basis, this represented a growth of 6.2%, the strongest growth level in 23 consecutive quarters. Rents are expected to rise further, albeit at a slower pace, until new supply comes onboard in 2014.

Retail development expansion activity remained on track despite waning spending trends among Thai consumers in Q2. There were several new developments announced during the quarter as new players and residential developers tap opportunities in the retail sector. From now until 2014, an estimated 141,000 sq m of new retail space is expected to come onboard in downtown Bangkok.

The residential market in Bangkok continues to expand albeit at a slower pace with 1,600 unit launches in the CBD vis-a-vis 3,000 units in Q1. Our research shows the revival of the Riverside area, particularly with the major launch of new commercial and residential projects over the last few quarters. Moving forward, these developments, especially those along riverside locations in Charoenkrung and Charoennakorn will spur increasing attention to this emerging residential zone. Overall launch prices in the CBD increased by 5.5% q-o-q to reach THB152,000 per sq m, and is forecasted to rise moderately in the near-term amid rising development and land costs.