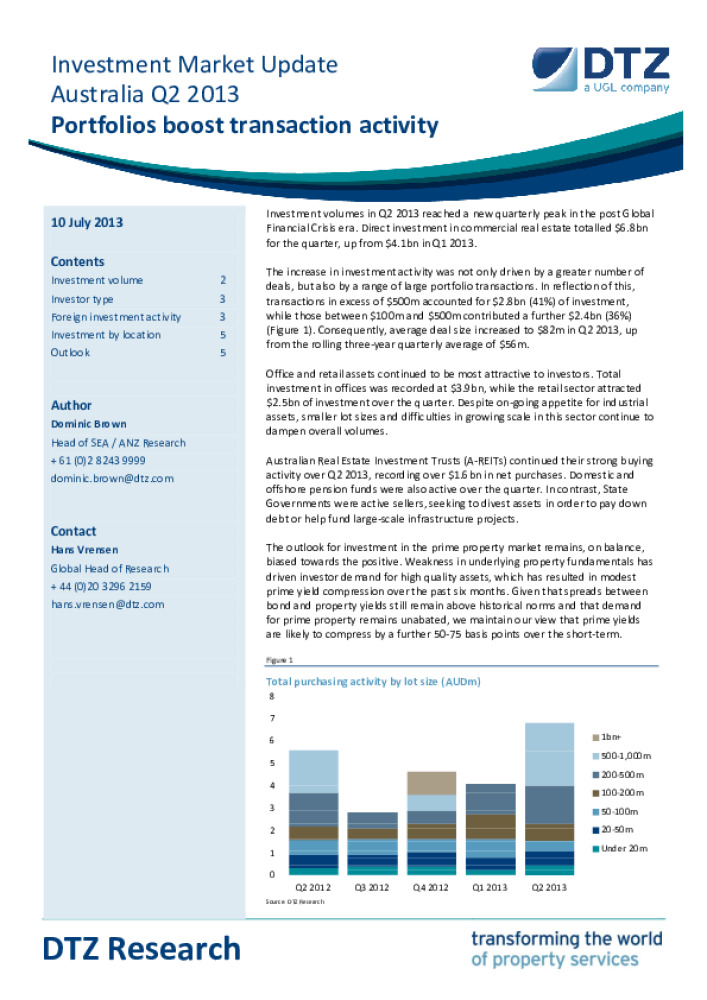 Investment volumes in Q2 2013 reached a new quarterly peak in the post Global Financial Crisis era. Direct investment in commercial real estate totalled $6.8bn for the quarter, up from $4.1bn in Q1 2013.

The increase in investment activity was not only driven by a greater number of deals, but also by a range of large portfolio transactions. In reflection of this, transactions in excess of $500m accounted for $2.8bn (41%) of investment, while those between $100m and $500m contributed a further $2.4bn (36%). Consequently, average deal size increased to $82m in Q2 2013, up from the rolling three-year quarterly average of $56m.

Office and retail assets continued to be most attractive to investors. Total investment in offices was recorded at $3.9bn, while the retail sector attracted $2.5bn of investment over the quarter. Despite on-going appetite for industrial assets, smaller lot sizes and difficulties in growing scale in this sector continue to dampen overall volumes.

The outlook for investment in the prime property market remains, on balance, biased towards the positive. Weakness in underlying property fundamentals has driven investor demand for high quality assets, which has resulted in modest prime yield compression over the past six months. Given that spreads between bond and property yields still remain above historical norms and that demand for prime property remains unabated, we maintain our view that prime yields are likely to compress by a further 50-75 basis points over the short-term.