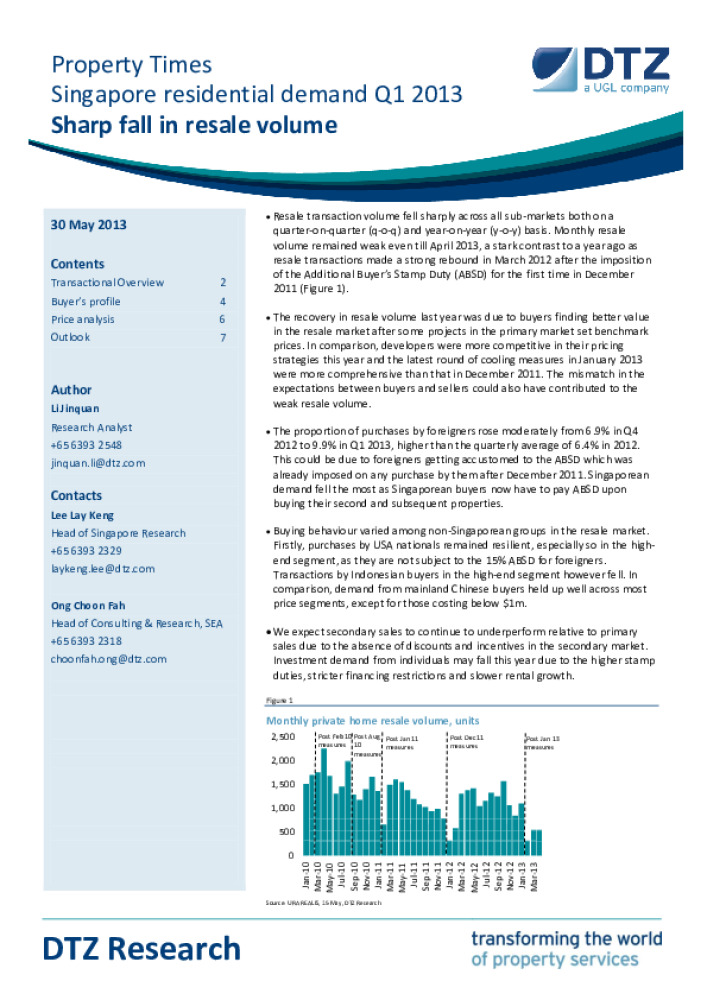 Resale transaction volume fell sharply across all sub-markets both on a quarter-on-quarter (q-o-q) and year-on-year (y-o-y) basis. Monthly resale volume remained weak even till April 2013, a stark contrast to a year ago as resale transactions made a strong rebound in March 2012 after the imposition of the Additional Buyer’s Stamp Duty (ABSD) for the first time in December 2011.

The recovery in resale volume last year was due to buyers finding better value in the resale market after some projects in the primary market set benchmark prices. In comparison, developers were more competitive in their pricing strategies this year and the latest round of cooling measures in January 2013 were more comprehensive than that in December 2011. The mismatch in the expectations between buyers and sellers could also have contributed to the weak resale volume.

The proportion of purchases by foreigners rose moderately from 6.9% in Q4 2012 to 9.9% in Q1 2013, higher than the quarterly average of 6.4% in 2012. This could be due to foreigners getting accustomed to the ABSD which was already imposed on any purchase by them after December 2011. Singaporean demand fell the most as Singaporean buyers now have to pay ABSD upon buying their second and subsequent properties.

Buying behaviour varied among non-Singaporean groups in the resale market. Firstly, purchases by USA nationals remained resilient, especially so in the high-end segment, as they are not subject to the 15% ABSD for foreigners. Transactions by Indonesian buyers in the high-end segment however fell. In comparison, demand from mainland Chinese buyers held up well across most price segments, except for those costing below $1m.

We expect secondary sales to continue to underperform relative to primary sales due to the absence of discounts and incentives in the secondary market. Investment demand from individuals may fall this year due to the higher stamp duties, stricter financing restrictions and slower rental growth.