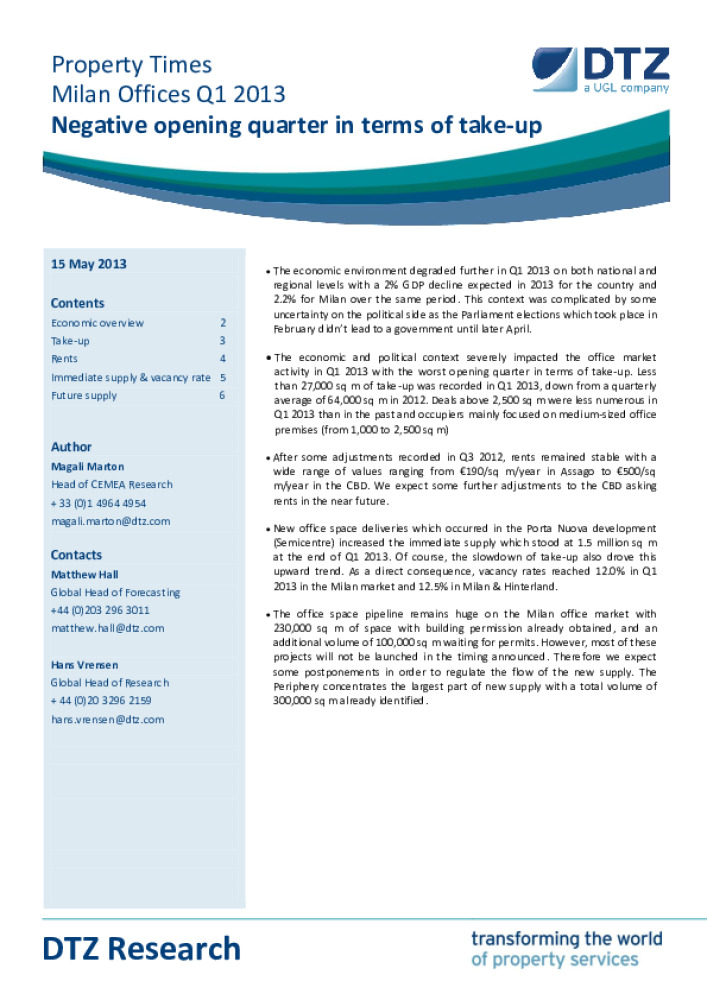 The economic environment degraded further in Q1 2013 on both national and regional levels with a 2% GDP decline expected in 2013 for the country and 2.2% for Milan over the same period. This context was complicated by some uncertainty on the political side as the Parliament elections which took place in February didn’t lead to a government until later April.

After some adjustments recorded in Q3 2012, rents remained stable with a wide range of values ranging from €190/sq m/year in Assago to €500/sq m/year in the CBD. We expect some further adjustments to the CBD asking rents in the near future.

New office space deliveries which occurred in the Porta Nuova development (Semicentre) increased the immediate supply which stood at 1.5 million sq m at the end of Q1 2013. Of course, the slowdown of take-up also drove this upward trend. As a direct consequence, vacancy rates reached 12.0% in Q1 2013 in the Milan market and 12.5% in Milan & Hinterland.

The office space pipeline remains huge on the Milan office market with 230,000 sq m of space with building permission already obtained, and an additional volume of 100,000 sq m waiting for permits. However, most of these projects will not be launched in the timing announced. Therefore we expect some postponements in order to regulate the flow of the new supply. The Periphery concentrates the largest part of new supply with a total volume of 300,000 sq m already identified.