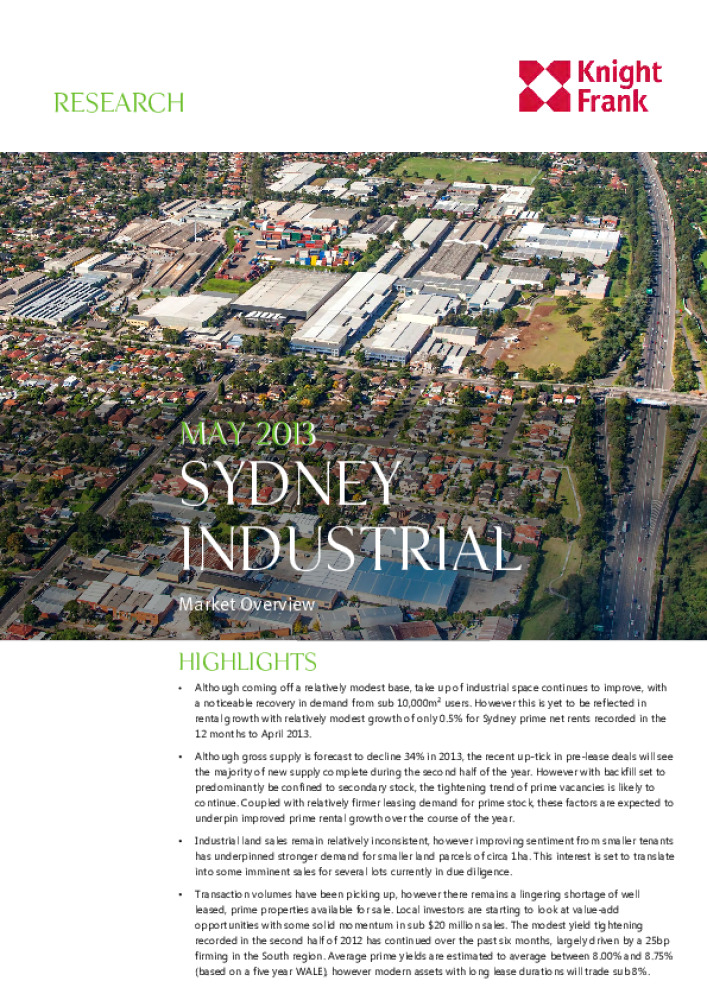 Although coming off a relatively modest base, take up of industrial space continues to improve, with a noticeable recovery in demand from sub 10,000m² users. However this is yet to be reflected in rental growth with relatively modest growth of only 0.5% for Sydney prime net rents recorded in the 12 months to April 2013.

Although gross supply is forecast to decline 34% in 2013, the recent up-tick in pre-lease deals will see the majority of new supply complete during the second half of the year. However with backfill set to predominantly be confined to secondary stock, the tightening trend of prime vacancies is likely to continue. Coupled with relatively firmer leasing demand for prime stock, these factors are expected to underpin improved prime rental growth over the course of the year.

Industrial land sales remain relatively inconsistent, however improving sentiment from smaller tenants has underpinned stronger demand for smaller land parcels of circa 1ha. This interest is set to translate into some imminent sales for several lots currently in due diligence.

Transaction volumes have been picking up, however there remains a lingering shortage of well leased, prime properties available for sale. Local investors are starting to look at value-add opportunities with some solid momentum in sub $20 million sales. The modest yield tightening recorded in the second half of 2012 has continued over the past six months, largely driven by a 25bp firming in the South region. Average prime yields are estimated to average between 8.00% and 8.75% (based on a five year WALE), however modern assets with long lease durations will trade sub 8%.