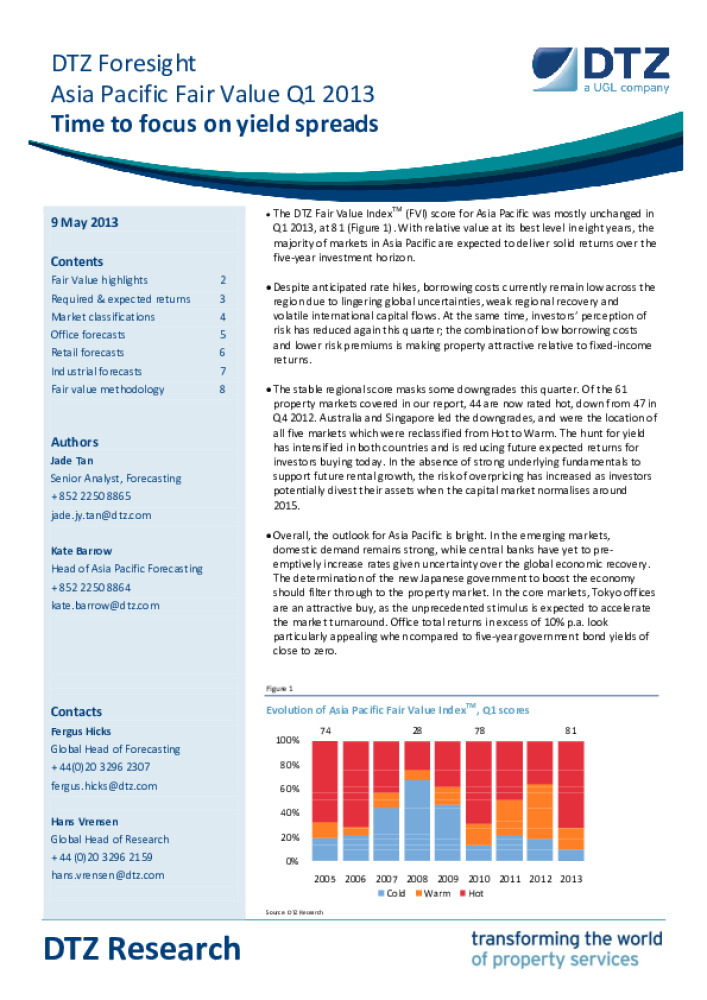 The DTZ Fair Value IndexTM (FVI) score for Asia Pacific was mostly unchanged in Q1 2013, at 81. With relative value at its best level in eight years, the majority of markets in Asia Pacific are expected to deliver solid returns over the five-year investment horizon.

The stable regional score masks some downgrades this quarter. Of the 61 property markets covered in our report, 44 are now rated hot, down from 47 in Q4 2012. Australia and Singapore led the downgrades, and were the location of all five markets which were reclassified from Hot to Warm. The hunt for yield has intensified in both countries and is reducing future expected returns for investors buying today. In the absence of strong underlying fundamentals to support future rental growth, the risk of overpricing has increased as investors potentially divest their assets when the capital market normalises around 2015.

Overall, the outlook for Asia Pacific is bright. In the emerging markets, domestic demand remains strong, while central banks have yet to pre-emptively increase rates given uncertainty over the global economic recovery. The determination of the new Japanese government to boost the economy should filter through to the property market. In the core markets, Tokyo offices are an attractive buy, as the unprecedented stimulus is expected to accelerate the market turnaround. Office total returns in excess of 10% p.a. look particularly appealing when compared to five-year government bond yields of close to zero.