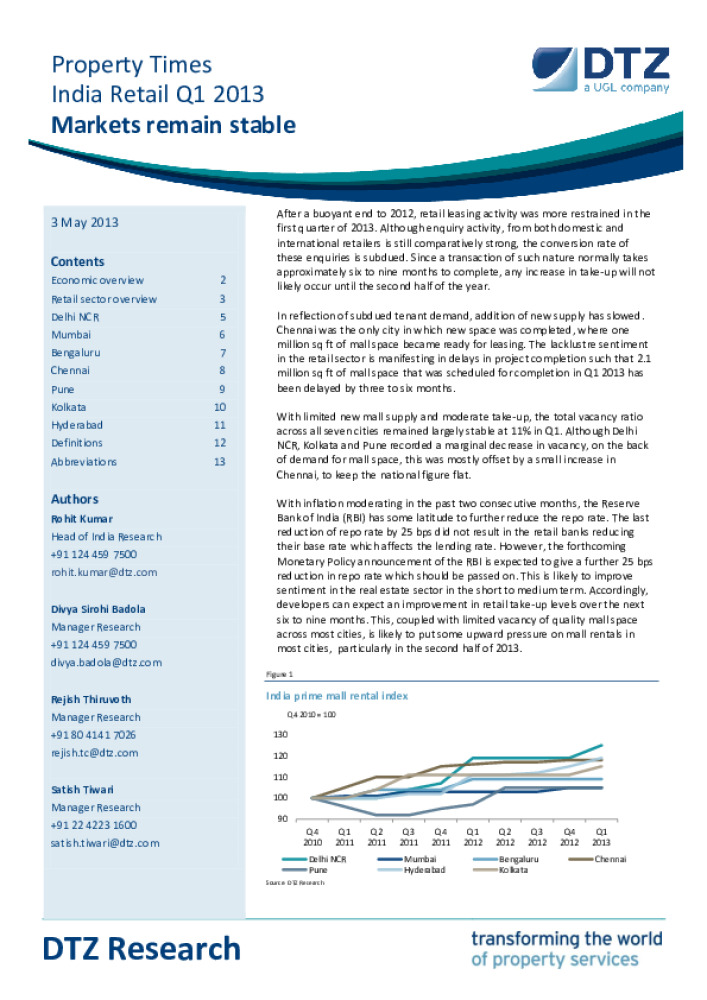 After a buoyant end to 2012, retail leasing activity was more restrained in the first quarter of 2013. Although enquiry activity, from both domestic and international retailers is still comparatively strong, the conversion rate of these enquiries is subdued. Since a transaction of such nature normally takes approximately six to nine months to complete, any increase in take-up will not likely occur until the second half of the year.

In reflection of subdued tenant demand, addition of new supply has slowed. Chennai was the only city in which new space was completed, where one million sq ft of mall space became ready for leasing. The lacklustre sentiment in the retail sector is manifesting in delays in project completion such that 2.1 million sq ft of mall space that was scheduled for completion in Q1 2013 has been delayed by three to six months.

With limited new mall supply and moderate take-up, the total vacancy ratio across all seven cities remained largely stable at 11% in Q1. Although Delhi NCR, Kolkata and Pune recorded a marginal decrease in vacancy, on the back of demand for mall space, this was mostly offset by a small increase in Chennai, to keep the national figure flat.

With inflation moderating in the past two consecutive months, the Reserve Bank of India (RBI) has some latitude to further reduce the repo rate. The last reduction of repo rate by 25 bps did not result in the retail banks reducing their base rate which affects the lending rate. However, the forthcoming Monetary Policy announcement of the RBI is expected to give a further 25 bps reduction in repo rate which should be passed on. This is likely to improve sentiment in the real estate sector in the short to medium term. Accordingly, developers can expect an improvement in retail take-up levels over the next six to nine months. This, coupled with limited vacancy of quality mall space across most cities, is likely to put some upward pressure on mall rentals in most cities, particularly in the second half of 2013.