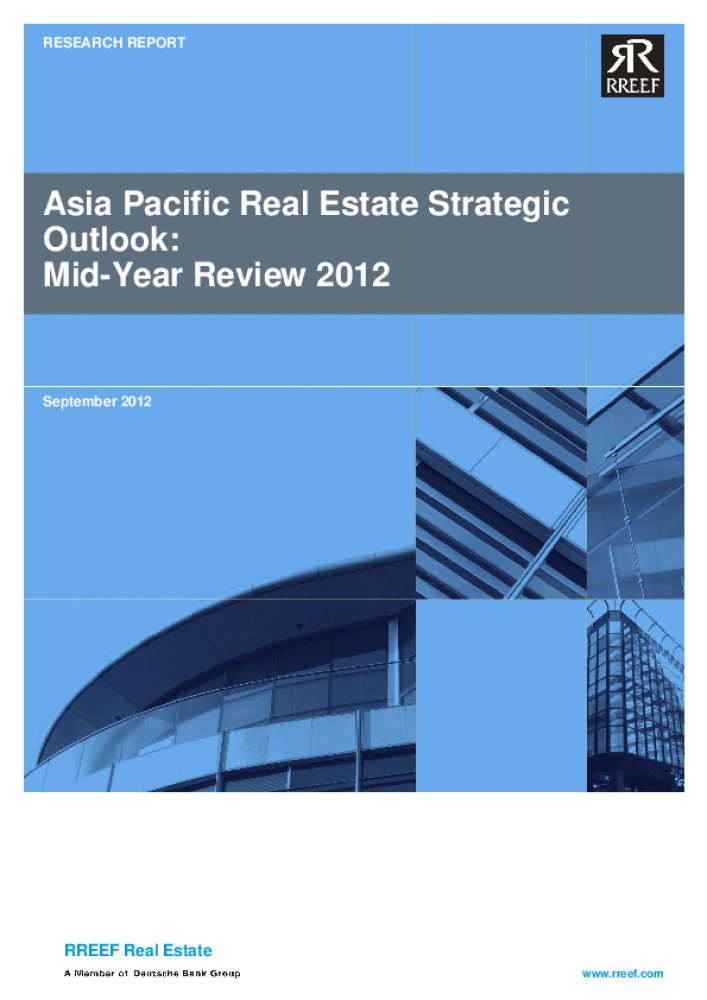 Economy: An uncertain global economic environment in the first half of 2012 led to moderating activity levels in commercial real estate markets across the Asia Pacific region. The uneven recovery in the United States,a slowdown in China, and uncertainty surrounding the Eurozone debt crisis have reduced growth prospects for the region.

Office: Wavering economic conditions have inevitably deterred real estate demand, particularly in the office sector. For the remainder of 2012, we expect overall leasing demand in the key office markets in the Asia Pacific region to moderate due to slower economic growth and corporate hiring. A smaller supply pipeline will cushion any drastic declines in rents and capital values, with office yields to hold as demand for incomeproducing assets remains high.

Retail: The retail sector is generally holding up well, but has softened somewhat over the past six months as consumer confidence has become more hesitant. Retail leasing demand held firm in Greater China, particularly from international retailers specializing in fast fashion, luxury goods, and food and beverages. Elsewhere in the region, retail leasing demand weakened slightly. Some rental growth was recorded in Greater China and in many of the gateway cities in Southeast Asia, but rents remained largely flat in other markets. Similarly, we have witnessed keen interest for retail assets given their defensive nature.

Industrial: Weaker manufacturing output and exports have dented demand in the industrial sector. Rental growth continued for most markets, but in Singapore, high-tech rents were generally flat due to weaker demand for back office space. Moderate rental growth is projected for most centres over 2012. We expect a slowdown in industrial space for traditional manufacturers but this will be offset by higher retailer demand for logistics space as retailers seek to expand their footprint as incomes continue to grow for many Asian economies.

Investments: All three major property sectors—office, retail, and industrial—experienced a decline in both leasing and sales activity in the first half of 2012. In the current environment, growth momentum for rents and capital values has tapered with yields staying fairly flat. Investor interest, however, remained positive relative to Europe and the United States. In light of this, investors should focus on the more mature and transparent markets of Australia, Japan (especially Tokyo), and Singapore. Selective opportunities also exist in China and the gateway cities of Southeast Asia given that domestic growth has been fairly resilient despite the problems in Europe and the United States. While a strong showing in investment sales is unlikely to occur in the second half of 2012, a degree of continued investor interest should result in modest growth in capital values in most markets and sectors, while yields are forecast to remain largely stable across the region.