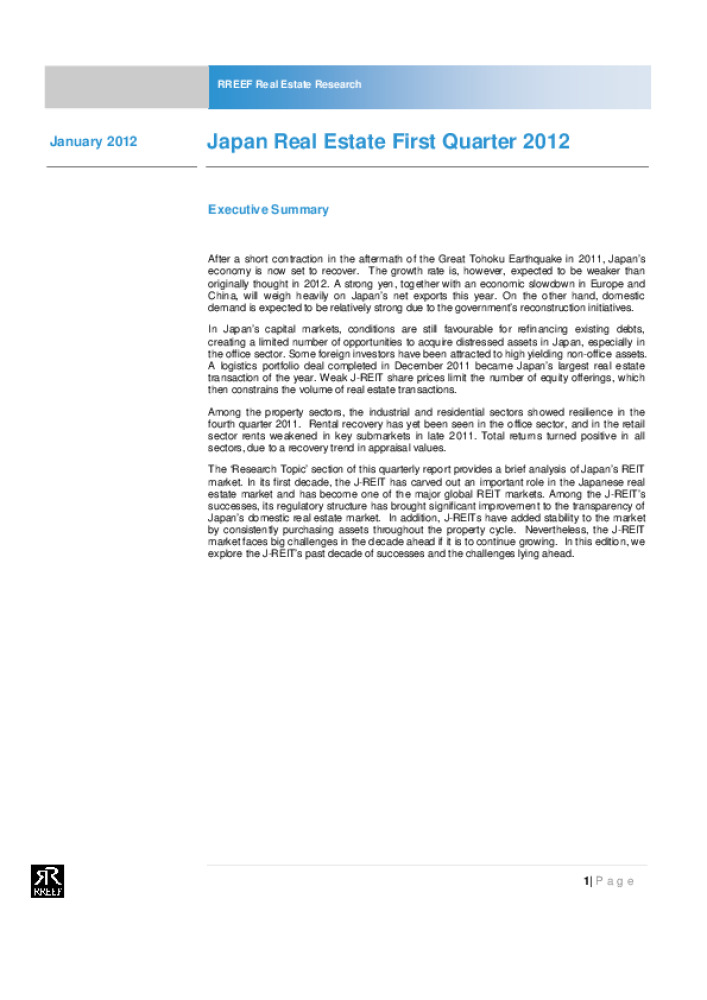 After a short contraction in the aftermath of the Great Tohoku Earthquake in 2011, Japan’s economy is now set to recover. The growth rate is, however, expected to be weaker than originally thought in 2012. A strong yen, together with an economic slowdown in Europe and China, will weigh heavily on Japan’s net exports this year. On the other hand, domestic demand is expected to be relatively strong due to the government’s reconstruction initiatives.

In Japan’s capital markets, conditions are still favourable for refinancing existing debts, creating a limited number of opportunities to acquire distressed assets in Japan, especially in the office sector. Some foreign investors have been attracted to high yielding non-office assets. A logistics portfolio deal completed in December 2011 became Japan’s largest real estate transaction of the year. Weak J-REIT share prices limit the number of equity offerings, which then constrains the volume of real estate transactions.

Among the property sectors, the industrial and residential sectors showed resilience in the fourth quarter 2011. Rental recovery has yet been seen in the office sector, and in the retail sector rents weakened in key submarkets in late 2011. Total returns turned positive in all sectors, due to a recovery trend in appraisal values.

The ‘Research Topic’ section of this quarterly report provides a brief analysis of Japan’s REIT market. In its first decade, the J-REIT has carved out an important role in the Japanese real estate market and has become one of the major global REIT markets. Among the J-REIT’s successes, its regulatory structure has brought significant improvement to the transparency of Japan’s domestic real estate market. In addition, J-REITs have added stability to the market by consistently purchasing assets throughout the property cycle. Nevertheless, the J-REIT market faces big challenges in the decade ahead if it is to continue growing. In this edition, we explore the J-REIT’s past decade of successes and the challenges lying ahead.