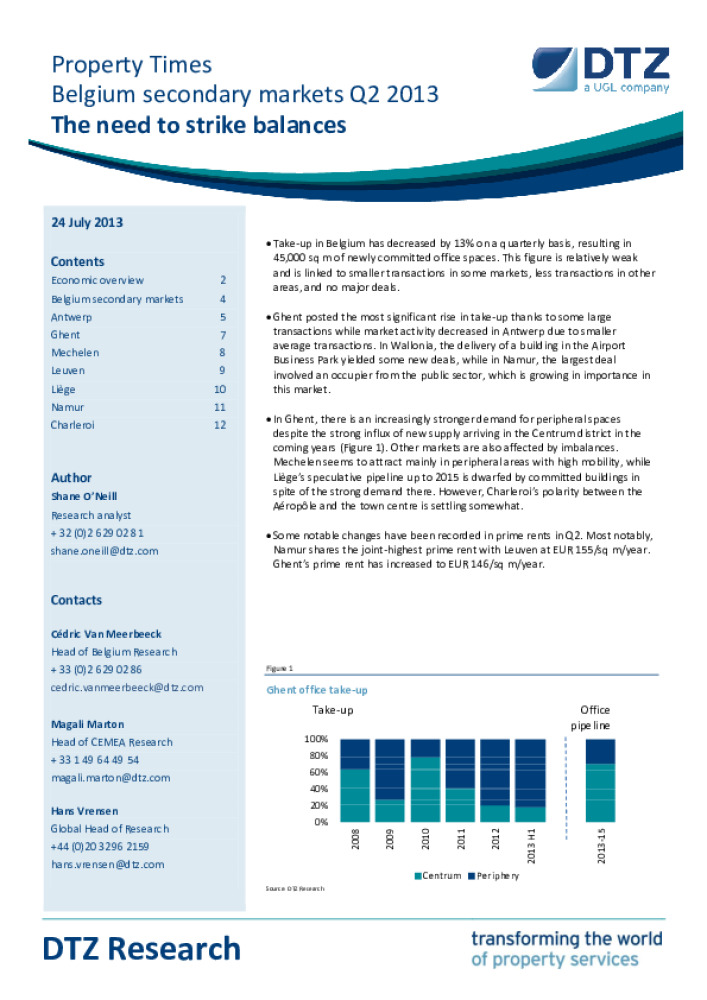 Take-up in Belgium has decreased by 13% on a quarterly basis, resulting in 45,000 sq m of newly committed office spaces. This figure is relatively weak and is linked to smaller transactions in some markets, less transactions in other areas, and no major deals.

Ghent posted the most significant rise in take-up thanks to some large transactions while market activity decreased in Antwerp due to smaller average transactions. In Wallonia, the delivery of a building in the Airport Business Park yielded some new deals, while in Namur, the largest deal involved an occupier from the public sector, which is growing in importance in this market.

In Ghent, there is an increasingly stronger demand for peripheral spaces despite the strong influx of new supply arriving in the Centrum district in the coming years (Figure 1). Other markets are also affected by imbalances. Mechelen seems to attract mainly in peripheral areas with high mobility, while Liège’s speculative pipeline up to 2015 is dwarfed by committed buildings in spite of the strong demand there. However, Charleroi’s polarity between the Aéropôle and the town centre is settling somewhat.

Some notable changes have been recorded in prime rents in Q2. Most notably, Namur shares the joint-highest prime rent with Leuven at EUR 155/sq m/year. Ghent’s prime rent has increased to EUR 146/sq m/year.