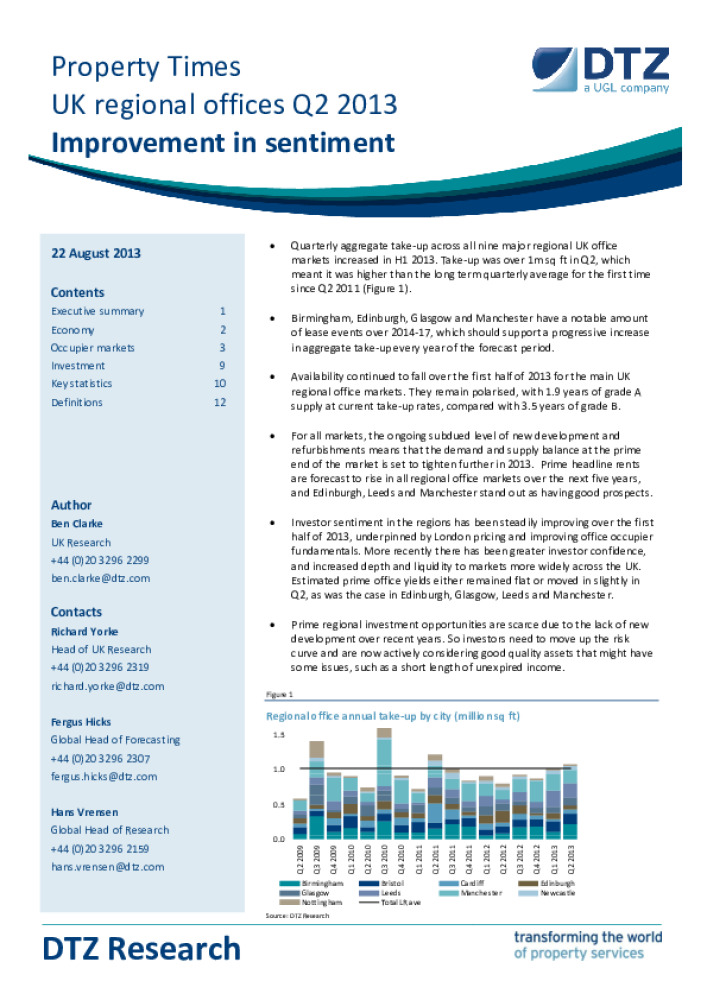 Quarterly aggregate take-up across all nine major regional UK office markets increased in H1 2013. Take-up was over 1m sq ft in Q2, which meant it was higher than the long term quarterly average for the first time since Q2 2011.

Birmingham, Edinburgh, Glasgow and Manchester have a notable amount of lease events over 2014-17, which should support a progressive increase in aggregate take-up every year of the forecast period.

Availability continued to fall over the first half of 2013 for the main UK regional office markets. They remain polarised, with 1.9 years of grade A supply at current take-up rates, compared with 3.5 years of grade B.

For all markets, the ongoing subdued level of new development and refurbishments means that the demand and supply balance at the prime end of the market is set to tighten further in 2013. Prime headline rents are forecast to rise in all regional office markets over the next five years, and Edinburgh, Leeds and Manchester stand out as having good prospects.

Investor sentiment in the regions has been steadily improving over the first half of 2013, underpinned by London pricing and improving office occupier fundamentals. More recently there has been greater investor confidence, and increased depth and liquidity to markets more widely across the UK. Estimated prime office yields either remained flat or moved in slightly in Q2, as was the case in Edinburgh, Glasgow, Leeds and Manchester.

Prime regional investment opportunities are scarce due to the lack of new development over recent years. So investors need to move up the risk curve and are now actively considering good quality assets that might have some issues, such as a short length of unexpired income.