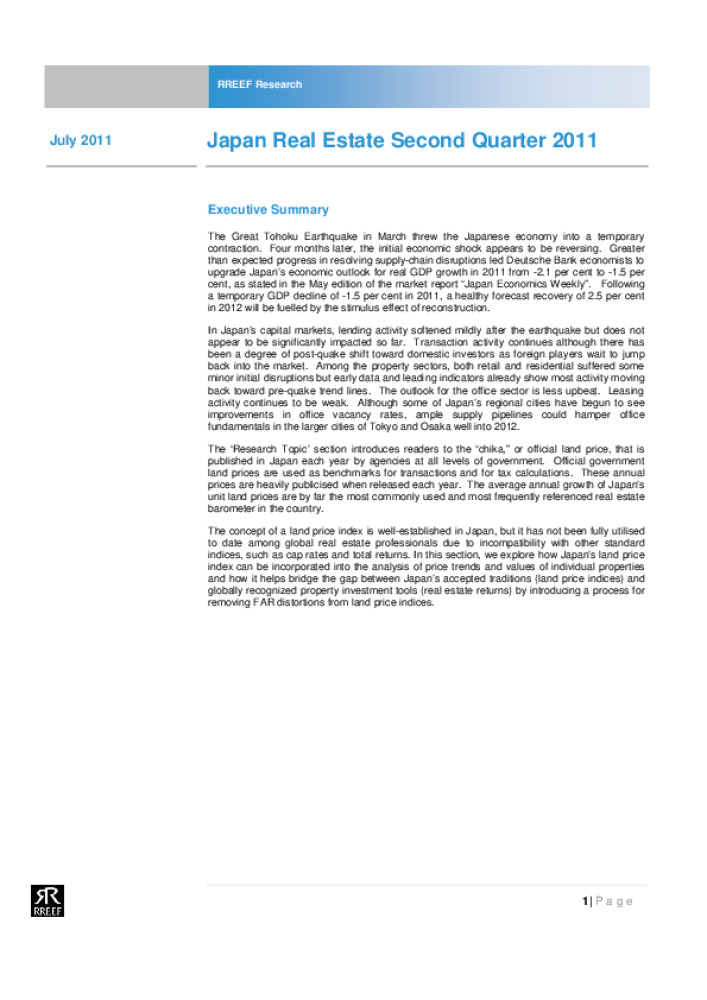 The Great Tohoku Earthquake in March threw the Japanese economy into a temporary contraction. Four months later, the initial economic shock appears to be reversing. Greater than expected progress in resolving supply-chain disruptions led Deutsche Bank economists to upgrade Japan’s economic outlook for real GDP growth in 2011 from -2.1 per cent to -1.5 per cent, as stated in the May edition of the market report “Japan Economics Weekly”. Following a temporary GDP decline of -1.5 per cent in 2011, a healthy forecast recovery of 2.5 per cent in 2012 will be fuelled by the stimulus effect of reconstruction.

In Japan’s capital markets, lending activity softened mildly after the earthquake but does not appear to be significantly impacted so far. Transaction activity continues although there has been a degree of post-quake shift toward domestic investors as foreign players wait to jump back into the market. Among the property sectors, both retail and residential suffered some minor initial disruptions but early data and leading indicators already show most activity moving back toward pre-quake trend lines. The outlook for the office sector is less upbeat. Leasing activity continues to be weak. Although some of Japan’s regional cities have begun to see improvements in office vacancy rates, ample supply pipelines could hamper office fundamentals in the larger cities of Tokyo and Osaka well into 2012.