This report presents the results of our second shopping centre (SC) investment benchmark which analyses the market size, retail prospects, the market stability and the potential return across 16 European countries.

Germany ranks number one as a core destination for shopping centre investment, followed closely by the UK, France, Norway and Sweden.

Romania, Poland, Hungary, the Czech Republic and Austria have made the top five ranking of opportunistic destinations.

Consumer confidence is growing in all areas surveyed helping to spur on a positive outlook for the retail trade.

Investor focus on the prime segment of the market has materialised by an overall inward yield shift. The average prime shopping centre yield in the surveyed area moved in by 15 bps between Q3 2012 and Q3 2013 and stands at 6.30%.

From next year the prime yield gap between Core and non-Core countries could start slowly narrowing as investment activity is expected to broaden to the whole of Europe. 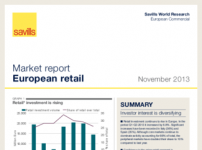