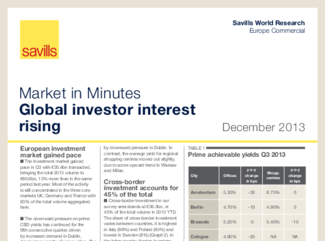 The investment market gained pace in Q3 with €30.4bn transacted, bringing the total 2013 volume to €80.6bn, 13% more than in the same period last year. Most of the activity is still concentrated in the  three core markets UK, Germany and France with 83% of the total volume aggregated here.

The downward pressure on prime CBD yields has continued for the fifth consecutive quarter, driven by increased demand in Dublin, Amsterdam and the German cities. The average prime CBD yield  now stands at 4.9%.

The office yield gap between prime and secondary as well as core and periphery continued to narrow as investors are increasingly looking at opportunities outside the core (Graph1).

Prime shopping centre yields have moved in as well to 5.6% on average, although this is only driven  by downward pressure in Dublin. In contrast, the average yield for regional shopping centres moved  out slightly, due to some upward trend in Warsaw and Milan.

Cross-border investment in our survey area stands at €36.3bn, or 45% of the total volume in 2013 YTD. The share of cross-border investment varies between countries, it is highest in Italy (89%) and  Poland (85%) and lowest in Sweden (8%) (Graph 2). In the latter country, foreign investors traditionally find it hard to compete with domestic buyers.

The UK and Germany account for about 67% of the total cross border volume, which is equal to the share they have over total investment (Graph 3). Germany is still a predominantly domestic buyers'  market but its safe haven status has attracted increasing amounts of cross border investment. In 2013, €6.1bn (33% of the total) of transactions were signed by foreign buyers.