On one hand, the New Year saw the England cricket team suffer an excruciatingly embarrassing 5-0 defeat against Australia. But on the other hand, the Bristish economy and real estate markets are in rude health ! Indeed, investment volumes in the City have been so strong that property even made one of its rare appearances on the front page of the Financial Times ! Accordingly, it is only timely that we focus on the UK property market in this month's edition of Europe Watch – and it really is a UK-wide, rather than just a London recovery. The seasonal good cheer has extended to Continental Europe, where the much-maligned Euro finished 2013 triumphantly as one of the world's strongest performing currencies. Admittedly, the real economic and property picture is more mixed, but we are hugely encouraged by Spain and Ireland – both of which emerged from Q3 2013 recession depths.  Investment volumes have decisively increased in both countries, with Ireland seeing rent increases as well. Still, Europe has much to do in the way of reform and rebalancing, but one can't help but feel cheery that 2014 will be a good year for European property, if not for our soccer players – including title holders Spain – in the ever inhospitable football climate of the World Cup 2014 in Brazil. 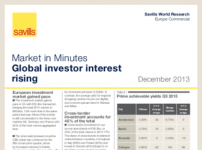