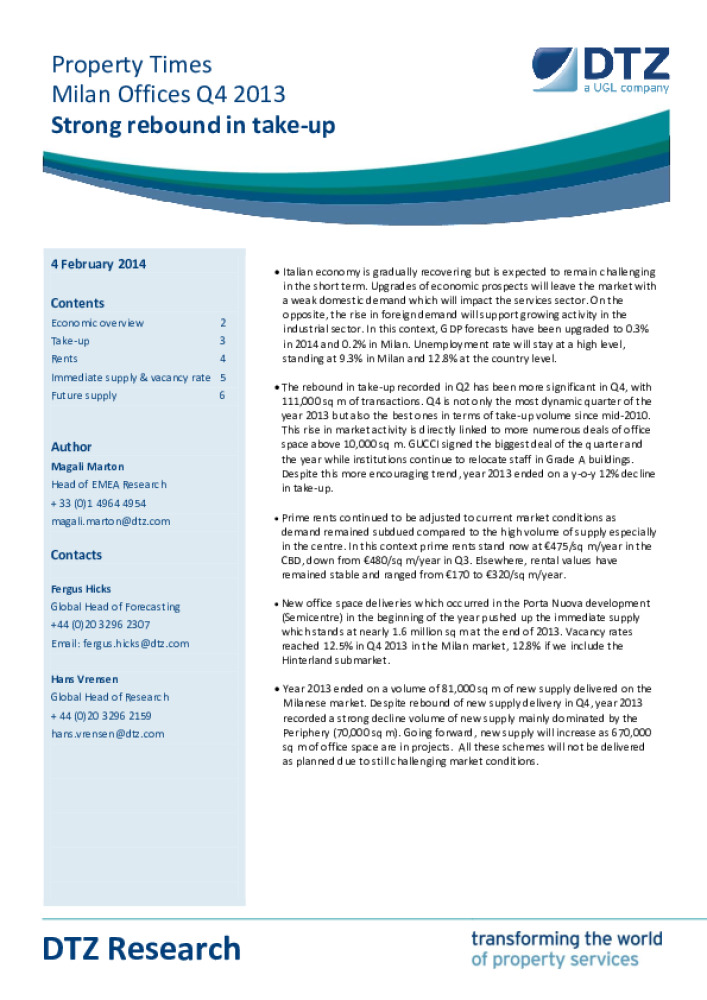 Italian economy is gradually recovering but is expected to remain challenging in the short term. Upgrades of economic prospects will leave the market with a weak domestic demand which will impact the services sector. On the opposite, the rise in foreign demand will support growing activity in the industrial sector. In this context, GDP forecasts have been upgraded to 0.3% in 2014 and 0.2% in Milan. Unemployment rate will stay at a high level, standing at 9.3% in Milan and 12.8% at the country level.

The rebound in take-up recorded in Q2 has been more significant in Q4, with 111,000 sq m of transactions. Q4 is not only the most dynamic quarter of the year 2013 but also the best ones in terms of take-up volume since mid-2010. This rise in market activity is directly linked to more numerous deals of office space above 10,000 sq m. GUCCI signed the biggest deal of the quarter and the year while institutions continue to relocate staff in Grade A buildings. Despite this more encouraging trend, year 2013 ended on a y-o-y 12% decline in take-up.

Prime rents continued to be adjusted to current market conditions as demand remained subdued compared to the high volume of supply especially in the centre. In this context prime rents stand now at €475/sq m/year in the CBD, down from €480/sq m/year in Q3. Elsewhere, rental values have remained stable and ranged from €170 to €320/sq m/year.

New office space deliveries which occurred in the Porta Nuova development (Semicentre) in the beginning of the year pushed up the immediate supply which stands at nearly 1.6 million sq m at the end of 2013. Vacancy rates reached 12.5% in Q4 2013 in the Milan market, 12.8% if we include the Hinterland submarket.