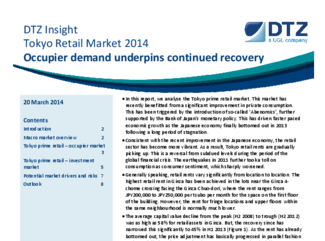 In this report, we analyse the Tokyo prime retail market. This market has recently benefitted from a significant improvement in private consumption. This has been triggered by the introduction of so‐called ‘Abenomics’, further supported by the Bank of Japan’s monetary policy. This has driven faster paced economic growth as the Japanese economy finally bottomed out in 2013 following a long period of stagnation.

Consistent with the recent improvement in the Japanese economy, the retail sector has become more vibrant. As a result, Tokyo retail rents are gradually picking up. This is a reversal from subdued levels during the period of the global financial crisis. The earthquakes in 2011 further took a toll on consumption as consumer sentiment, which sharply worsened.

Generally speaking, retail rents vary significantly from location to location. The highest retail rent in Ginza has been achieved in the lots near the Ginza 4‐ chome crossing facing the Ginza Chuo‐dori, where the rent ranges from JPY200,000 to JPY250,000 per tsubo per month for the space on the first floor of the building. However, the rent for fringe locations and upper floors within the same neighbourhood is normally much lower.