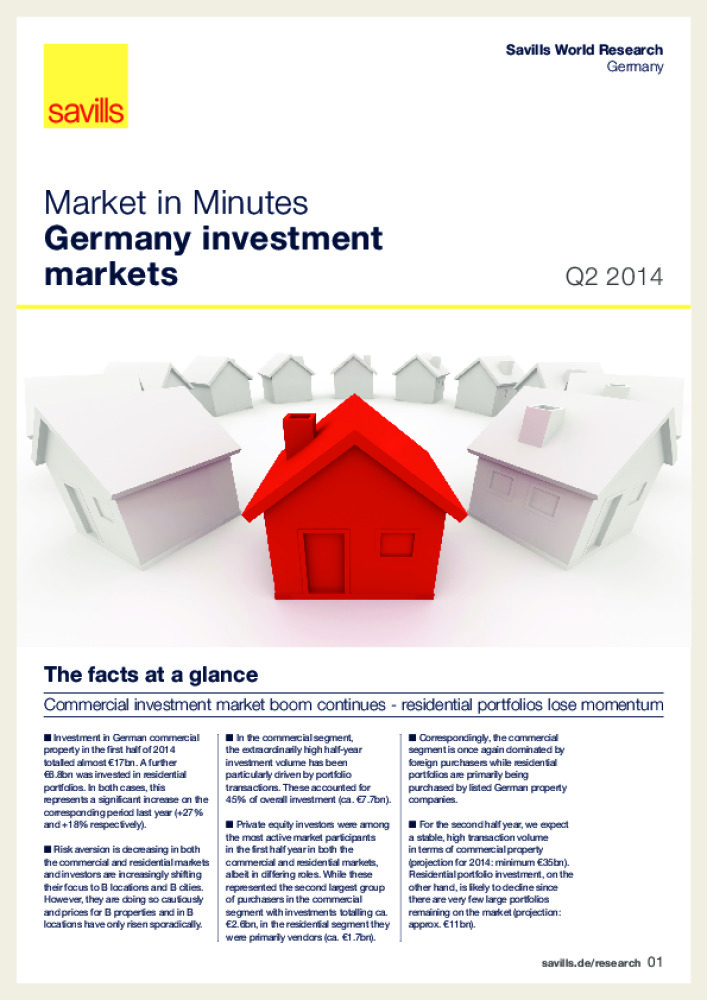 Investment in German commercial property in the first half of 2014 totalled almost €17bn. A further
€6.8bn was invested in residential portfolios. In both cases, this represents a significant increase on the corresponding period last year (+27% and +18% respectively).

Risk aversion is decreasing in both the commercial and residential markets and investors are increasingly shifting their focus to B locations and B cities. However, they are doing so cautiously and prices for B properties and in B locations have only risen sporadically.

In the commercial segment, the extraordinarily high half-year investment volume has been particularly driven by portfolio transactions. These accounted for 45% of overall investment (ca. €7.7bn).

Private equity investors were among the most active market participants in the first half year in both the commercial and residential markets, albeit in differing roles. While these represented the second largest group of purchasers in the commercial segment with investments totalling ca.€2.6bn, in the residential segment they were primarily vendors (ca. €1.7bn

Correspondingly, the commercial segment is once again dominated by foreign purchasers while residential portfolios are primarily being purchased by listed German property companies.

For the second half year, we expect a stable, high transaction volume in terms of commercial property (projection for 2014: minimum €35bn). Residential portfolio investment, on the other hand, is likely to decline since there are very few large portfolios remaining on the market (projection: approx. €11bn).