Interest of buyers and sellers aligned 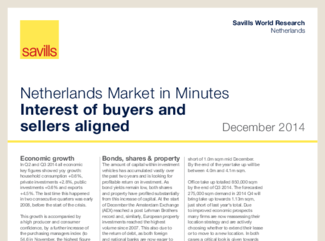 In Q2 and Q3 2014 all economic key figures showed yoy growth: household consumption +0.6%, private investments +2.8%, public investments +0.6% and exports +4.5%. The last time this happened in two consecutive quarters was early 2008, before the start of the crisis.

This growth is accompanied by a high producer and consumer confidence, by a further increase of the purchasing managers index (to 54.6 in November, the highest figure in nine months; source: Nevi), and by a positive outlook for 2015 among small and medium-sized enterprises, according to a recent survey.