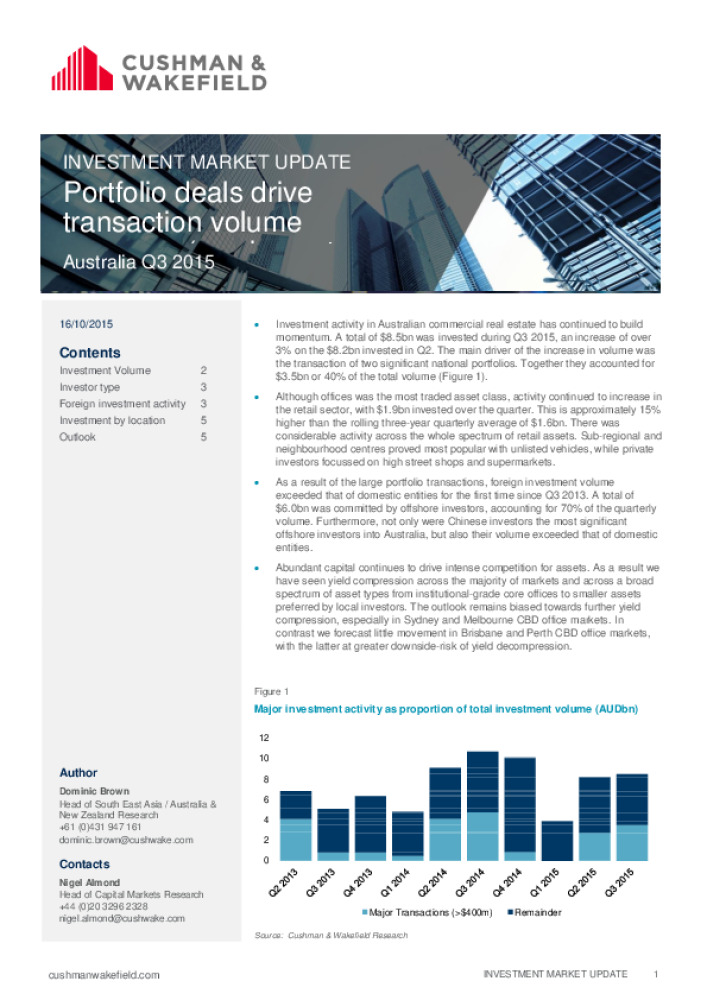 Investment activity in Australian commercial real estate has continued to build momentum. A total of $8.5bn was invested during Q3 2015, an increase of over 3% on the $8.2bn invested in Q2. The main driver of the increase in volume was the transaction of two significant national portfolios. Together they accounted for $3.5bn or 40% of the total volume (Figure 1).

Although offices was the most traded asset class, activity continued to increase in the retail sector, with $1.9bn invested over the quarter. This is approximately 15% higher than the rolling three-year quarterly average of $1.6bn. There was considerable activity across the whole spectrum of retail assets. Sub-regional and neighbourhood centres proved most popular with unlisted vehicles, while private investors focussed on high street shops and supermarkets.

As a result of the large portfolio transactions, foreign investment volume exceeded that of domestic entities for the first time since Q3 2013. A total of $6.0bn was committed by offshore investors, accounting for 70% of the quarterly volume. Furthermore, not only were Chinese investors the most significant offshore investors into Australia, but also their volume exceeded that of domestic entities.

Abundant capital continues to drive intense competition for assets. As a result we have seen yield compression across the majority of markets and across a broad spectrum of asset types from institutional-grade core offices to smaller assets preferred by local investors. The outlook remains biased towards further yield compression, especially in Sydney and Melbourne CBD office markets. In contrast we forecast little movement in Brisbane and Perth CBD office markets, with the latter at greater downside-risk of yield decompression.