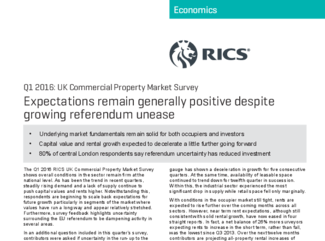 The Q1 2016 RICS UK Commercial Property Market Survey shows overall conditions in the sector remain firm at the national level. As has been the trend in recent quarters, steadily rising demand and a lack of supply continue to push capital values and rents higher. Notwithstanding this, respondents are beginning to scale back expectations for future growth particularly in segments of the market where values have run a long way and appear relatively stretched. Furthermore, survey feedback highlights uncertainty surrounding the EU referendum to be dampening activity in several areas.

In an additional question included in this quarter’s survey, contributors were asked if uncertainty in the run-up to the EU referendum was reducing investment in the commercial property market. The largest share nationally, some 38%, felt the referendum was indeed reducing investment. At the same time, 24% were of the opinion their local market had not been affected. A significant 29% did not know, while 9% felt the referendum had not caused an air of uncertainty in the market at all. The results were more one-sided in central London however. 80% of contributors from the capital said doubts over Britain’s future position in Europe were weighing on investment. Only 5% felt this was not affecting the market, while 15% were unsure.