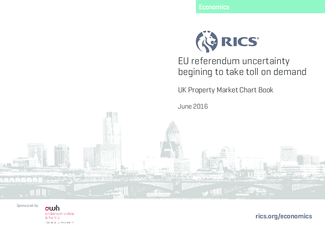 The second estimate of GDP remained unchanged, showing growth of 0.4% in the first quarter. A fall in business investment dragged slightly on growth while net trade subtracted 0.3% from the headline figure. Once again, household consumption was the main driver of the expansion, rising by 0.7% relative to Q4 2015.

The news headlines recently have been dominated by warnings from policymakers and think-tanks about the potential impact of a ‘Brexit’ on the UK’s economic performance. While the long-term outcome is impossible to predict, a vote to leave would increase uncertainty and may have implications for the UK’s growth prospects in the near term. This uncertainty effect is possibly already being reflected in the weaker business investment expenditure in recent quarters (see chart page 5).

The chart on the right shows the measure of uncertainty used by the Treasury (the metric incorporates currency, political and financial risk as well as consumer and business uncertainty indicators) in their recent analysis of the near-term impact of a ‘Brexit’ vote on economic growth in the UK. The chart suggests that the growing public realisation and debate around the upcoming decision (as domonstrated by the frequency of google searches related to the subject) has been a significant driver of the increase in uncertainty in recent months.