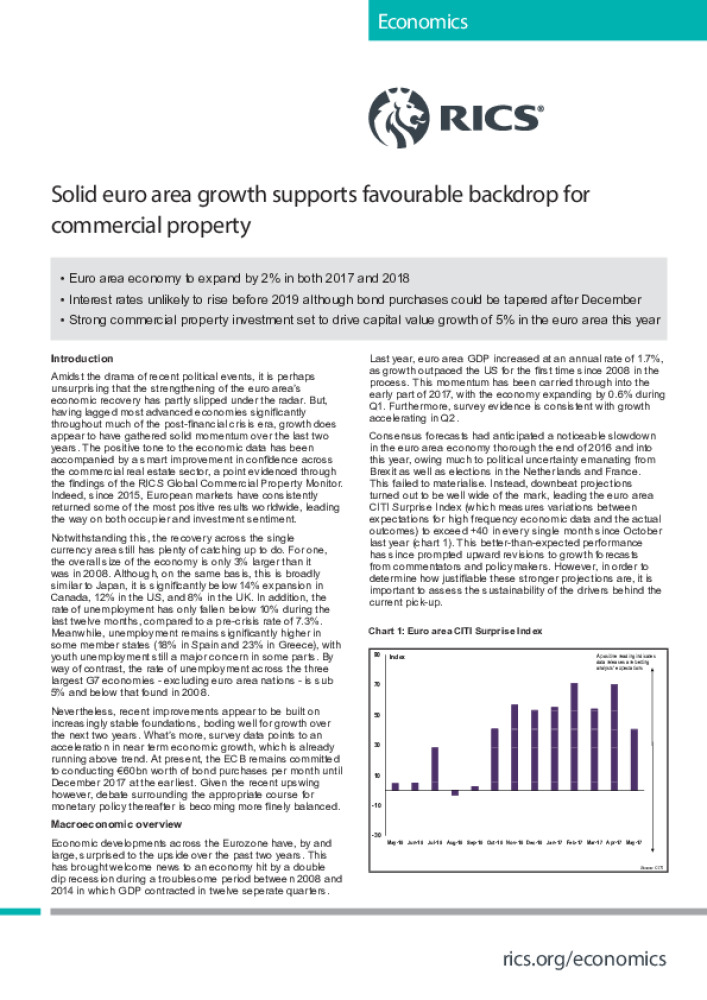 Amidst the drama of recent political events, it is perhaps unsurprising that the strengthening of the euro area’s economic recovery has partly slipped under the radar. But, having lagged most advanced economies significantly throughout much of the post-financial crisis era, growth does appear to have gathered solid momentum over the last two years. The positive tone to the economic data has been accompanied by a smart improvement in confidence across the commercial real estate sector, a point evidenced through the findings of the RICS Global Commercial Property Monitor. Indeed, since 2015, European markets have consistently returned some of the most positive results worldwide, leading the way on both occupier and investment sentiment.

Notwithstanding this, the recovery across the single currency area still has plenty of catching up to do. For one, the overall size of the economy is only 3% larger than it was in 2008. Although, on the same basis, this is broadly similar to Japan, it is significantly below 14% expansion in Canada, 12% in the US, and 8% in the UK. In addition, the rate of unemployment has only fallen below 10% during the last twelve months, compared to a pre crisis rate of 7.3%. Meanwhile, unemployment remains significantly higher in some member states (18% in Spain and 23% in Greece), with youth unemployment still a major concern in some parts. By way of contrast, the rate of unemployment across the three largest G7 economies - excluding euro area nations - is sub 5% and below that found in 2008.