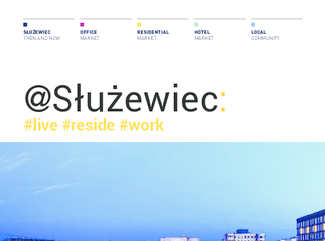 Służewiec represents the history of the Polish property market in a nutshell. When the first modern office building was delivered to the market in Wołoska Street exactly 25 years ago, no-one imagined that the largest business district in Poland would come into existence in this very spot.

2012 marked another anniversary. Office take-up in Służewiec hit a record high exactly five years ago as nearly 200,000 sq m of office space was leased within the space of 12 months. The residential market of Służewiec is now experiencing a similar boom with hotel operators also noticing the district’s potential: Warsaw’s largest office hub currently has no hotel base, but this will soon change. The office sector is now facing a series of challenges. A new business district has recently sprung up in Warsaw’s Wola district, one which Służewiec needs to compete with for tenants. Office property managers are taking up a number of initiatives engaging the local community to enliven this part of Mokotów. Służewiec is going through a transformation: from a rapidly growing business district where infrastructure lagged behind into a place both for work and for living.

The Occupier’s Perspective: Banking on Warsaw