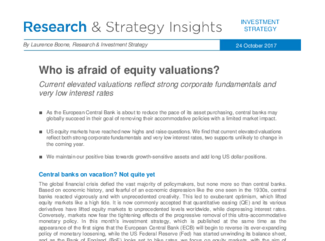 The global financial crisis defied the vast majority of policymakers, but none more so than central banks. Based on economic history, and fearful of an economic depression like the one seen in the 1930s, central banks reacted vigorously and with unprecedented creativity. This led to exuberant optimism, which lifted equity markets like a high tide. It is now commonly accepted that quantitative easing (QE) and its various derivatives have lifted equity markets to unprecedented levels worldwide, while depressing interest rates. Conversely, markets now fear the tightening effects of the progressive removal of this ultra-accommodative monetary policy. In this month’s investment strategy, which is published at the same time as the appearance of the first signs that the European Central Bank (ECB) will begin to reverse its ever-expanding policy of monetary loosening, while the US Federal Reserve (Fed) has started unwinding its balance sheet, and as the Bank of England (BoE) looks set to hike rates, we focus on equity markets, with the aim of assessing the level of valuations.

Since the ECB Forum on Central Banking was held in Sintra Portugal in June, central bankers have prepared markets for a change in their respective policy stances, albeit very gradually: the speed of purchases, globally, is slowing. The Fed is largely expected to hike interest rates in December, and has given plenty of details on its planned balance sheet unwinding, leaving little uncertainty as to its actions, if not its impact. The Fed is beginning its quantitative tightening with $10bn of US Treasuries and mortgage backed securities (MBS) redemptions set to roll off its balance sheet during the fourth quarter of 2017. This balance sheet unwinding will really take off in 2018. The Bank of Japan (BoJ) is also slowing purchases somewhat.