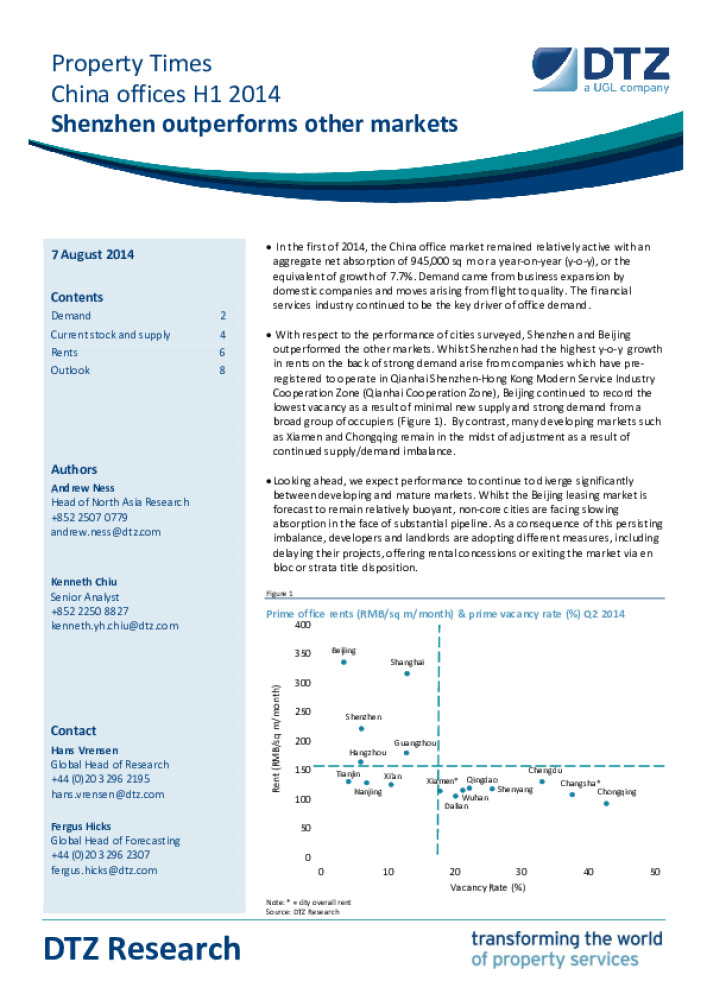 In the first of 2014, the China office market remained relatively active with an aggregate net absorption of 945,000 sq m or a year-on-year (y-o-y), or the equivalent of growth of 7.7%. Demand came from business expansion by domestic companies and moves arising from flight to quality. The financial services industry continued to be the key driver of office demand.

With respect to the performance of cities surveyed, Shenzhen and Beijing outperformed the other markets. Whilst Shenzhen had the highest y-o-y growth in rents on the back of strong demand arise from companies which have pre-registered to operate in Qianhai Shenzhen-Hong Kong Modern Service Industry Cooperation Zone (Qianhai Cooperation Zone), Beijing continued to record the lowest vacancy as a result of minimal new supply and strong demand from a broad group of occupiers. By contrast, many developing markets such as Xiamen and Chongqing remain in the midst of adjustment as a result of continued supply/demand imbalance.

Looking ahead, we expect performance to continue to diverge significantly between developing and mature markets. Whilst the Beijing leasing market is forecast to remain relatively buoyant, non-core cities are facing slowing absorption in the face of substantial pipeline. As a consequence of this persisting imbalance, developers and landlords are adopting different measures, including delaying their projects, offering rental concessions or exiting the market via en bloc or strata title disposition.