The year ahead : outlook for european property in 2013 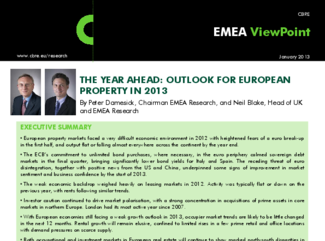 European property markets faced a very difficult economic environement in 2012 with heightened fears of a euro break-up in the first half, and output flat or falling almost everywhere across the continent by the year end.

The ECB's commitment to unlimited bond purchases where necessary, in the euro periphery calmed sovereign debt markets in the final quarter, bringing significantly lower bond yields for Italy and Spain. The receding threat of euro disintegration, together with positive news from the US and China, underpinned some signs of improvement in market sentiment and business confidence by the start of 2013.

The weak economic backdrop weighed heavily on leasing markets in 2012. Activity was typically flat or down on the previous year, with rents following similar trends.

Investor caution continued tu drive market polarisation, with a strong concentration in acquisitions of prime assets in core markets in northern Europe. London had its most active year since 2007.

With European economies still facing a weak growth outlook in 2013, occupier market trends are likely to be little changed in the next 12 months. Rental growth will remain elusive, confined to be limited rises in a few prime retail and office locations with demand pressures on scarce supply.

Both occupational and investment markets in European real estate will continue to show marked north-south disparities in 2013, with core markets in the north expected to record stability or even some improvement in pricing for prime property.

In the investment market, a key question fro 2013 is whether the polarisation between prime and secondary will ease. The best hope for secondary is a greater appetite for property risk but the availability of new debt finance for secondary property is unlikely to improve much, if at all, in the coming year. This leaves secondary property prospects reliant on economic fundamentals. The emerging trend for better quality secondary assets in stronger markets to attract greater investor interest looks set to gather pace in 2013.