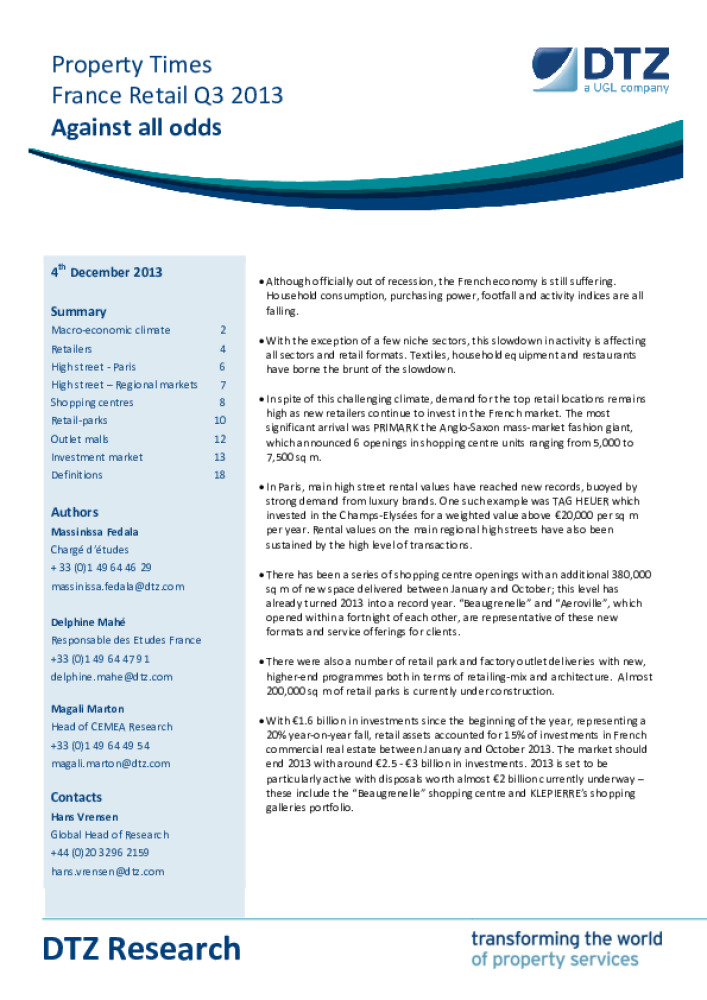 Although officially out of recession, the French economy is still suffering. Household consumption, purchasing power, footfall and activity indices are all falling.

With the exception of a few niche sectors, this slowdown in activity is affecting all sectors and retail formats. Textiles, household equipment and restaurants have borne the brunt of the slowdown.

In spite of this challenging climate, demand for the top retail locations remains high as new retailers continue to invest in the French market. The most significant arrival was Primark the Anglo-Saxon mass-market fashion giant, which announced 6 openings in shopping centre units ranging from 5,000 to 7,500 sq m.

In Paris, main high street rental values have reached new records, buoyed by strong demand from luxury brands. One such example was Tag Heuer which invested in the Champs-Elysées for a weighted value above €20,000 per sq m per year. Rental values on the main regional high streets have also been sustained by the high level of transactions.

There has been a series of shopping centre openings with an additional 380,000 sq m of new space delivered between January and October; this level has already turned 2013 into a record year. “Beaugrenelle” and “Aeroville”, which opened within a fortnight of each other, are representative of these new formats and service offerings for clients.

There were also a number of retail park and factory outlet deliveries with new, higher-end programmes both in terms of retailing-mix and architecture. Almost 200,000 sq m of retail parks is currently under construction.