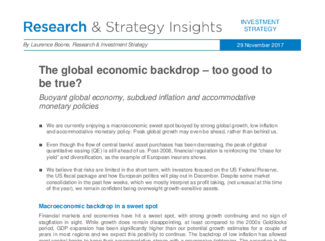 Financial markets and economies have hit a sweet spot, with strong growth continuing and no sign of stagflation in sight. While growth does remain disappointing, at least compared to the 2000s Goldilocks period, GDP expansion has been significantly higher than our potential growth estimates for a couple of years in most regions and we expect this positivity to continue. The backdrop of low inflation has allowed most central banks to keep their accommodative stance with a progressive tightening. The exception is the UK where the cost of living has climbed to 3% and worries of a supply slowdown are rising. Global GDP should accelerate further in 2018 with peak global growth reaching 3.8% (after 3.7% in 2017), reflecting a robust US expansion and improvement in several emerging markets, especially Brazil and India.

The peak of sequential growth may even be ahead and not behind us. Positive business and consumer sentiment are presently at 10-year highs in both the US and the Eurozone, consistent with the faster pace of expansion. In addition, while the easing of financial conditions is fading, the usual drivers of the economic cycle are gaining momentum. The revival of global trade, first, may prove to be an offsetting favourable factor. Moreover, the stronger endogenous engine is at work; the past improvement of labour markets directly feeds households’ purchasing power and indirectly boosts consumption thanks to renewed confidence and a reduced need for precautionary savings.

Looking into the details, our optimism is also supported by the US as a result of the progress being made towards tax reform with a corporate tax rate cut to 20% (from 39%), household tax cuts and a dollar repatriation scheme. It will remain a limited fiscal stimulus (about 0.25pp of GDP) but the economic momentum is strong, with GDP growth of around 3% annualised in the previous and current quarters - much higher than a year ago. In addition, loose financial conditions and subdued inflation underpin a firmer tone and, as a result, we have revised our 2017 growth forecast up to 2.3% from 2.1% and expect 2.5% next year (with the consensus respectively at 2.2% and 2.4%). Of course, a key variable will be US wage acceleration, which we expect to materialise considering how tight the labour market now is. But we expect the improvement to be only gradual. Altogether, our inflation forecast (also taking into account rising corporate pricing power and our expectation of a cyclical upturn in inflation expectations) is in line with the US Federal Reserve (Fed)’s and with the Federal Open Market Committee’s progressive renewal, we expect the US central bank to deliver three hikes next year, after its upcoming December rise.