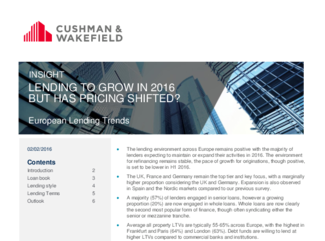 The lending environment across Europe remains positive with the majority of lenders expecting to maintain or expand their activities in 2016. The environment for refinancing remains stable, the pace of growth for originations, though positive, is set to be lower in H1 2016.

The UK, France and Germany remain the top tier and key focus, with a marginally higher proportion considering the UK and Germany. Expansion is also observed in Spain and the Nordic markets compared to our previous survey.

A majority (57%) of lenders engaged in senior loans, however a growing proportion (20%) are now engaged in whole loans. Whole loans are now clearly the second most popular form of finance, though often syndicating either the senior or mezzanine tranche.

Average all property LTVs are typically 55-65% across Europe, with the highest in Frankfurt and Paris (64%) and London (63%). Debt funds are willing to lend at higher LTVs compared to commercial banks and institutions.

We see a broader range in margins from ca 130bps in Stockholm and ca 140bps in Frankfurt and Paris, up to over 250bps in Lisbon. Commercial banks are typically offering the lowest margins ahead of institutions and debt funds. Separately we have observed margins in the UK rise 25bps - especially London.

Attitudes towards lending in both Tier 1 and Tier 2&3 cities shows little change compared with our previous survey. Only lending on speculative development appears more negative, though contrary to other feedback we see in the market.

Whilst weight of capital remains the primary risk, lenders see a broader range of risks in the market during 2016. Lower for longer interest rates and conservative lending will support CRE investment activity.