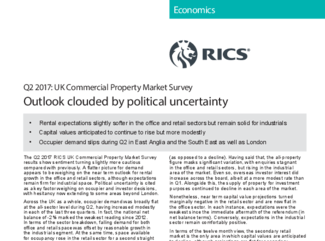 The Q2 2017 RICS UK Commercial Property Market Survey results show sentiment turning slightly more cautious compared with previously. A flatter picture for demand appears to be weighing on the near term outlook for rental growth in the office and retail sectors, although expectations remain firm for industrial space. Political uncertainty is cited as a key factor weighing on occupier and investor decisions, with hesitancy now extending to some areas beyond London.

Across the UK as a whole, occupier demand was broadly flat at the all-sector level during Q2, having increased modestly in each of the last three quarters. In fact, the national net balance of -2% marked the weakest reading since 2012. In terms of the sector breakdown, falling demand for both office and retail space was offset by reasonable growth in the industrial segment. At the same time, space available for occupancy rose in the retail sector for a second straight quarter, office availability held steady, while leasable space continued to decline relatively sharply in the industrial segment. Consistent with this, near term rental expectations turned marginally negative in the retail sector and broadly flat for offices. By way of contrast, industrial sector rents are anticipated to rise at a solid pace over the coming three months.

Further out, over the next twelve months, respondents do envisage modest rental growth across prime office space although the outlook is flat for secondary locations. Rental projections remain negative for secondary retail space and are now only marginally positive for prime. Meanwhile, both prime and secondary industrial rents are expected to chalk up solid gains over the year ahead. 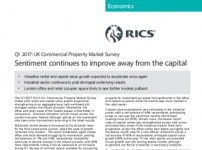