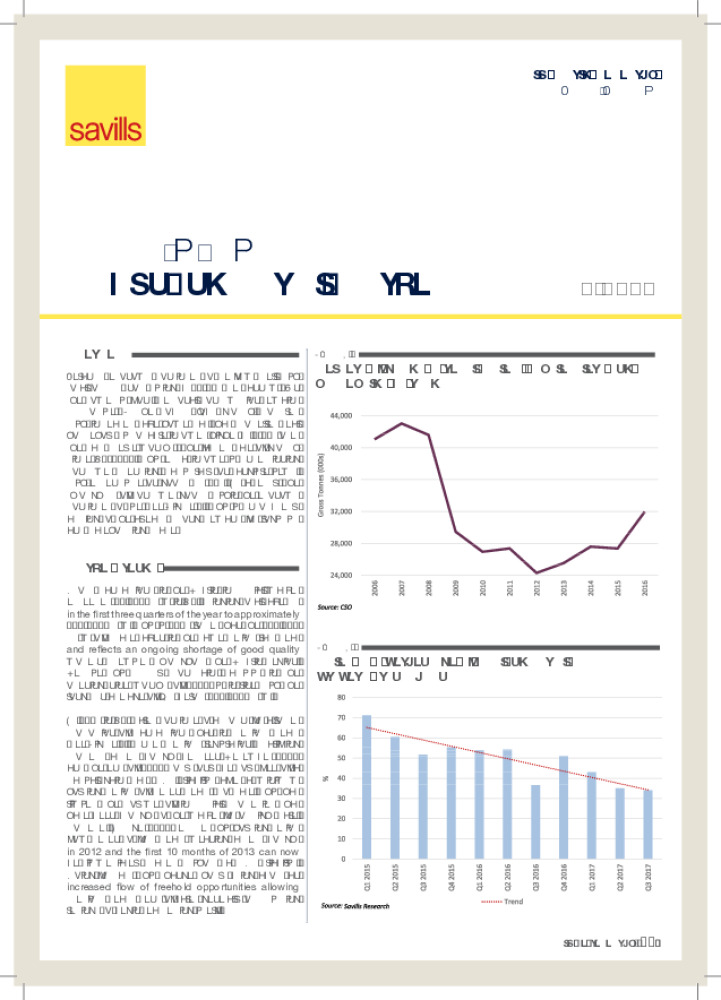 Ireland’s economy continues to perform well with total output now rising by 5.8% per annum. On the domestic front, personal consumption remains supportive. Further robust jobs growth, coupled with increased take-home pay, has propelled real household disposable incomes higher by 8.4% over the past twelve months - the fastest rate of growth since Q2 2005. This extra income is underpinning consumer spending, particularly on tangible items, with expenditure on goods up 3%. As a result, the throughput of consumer goods within the economy continues to rise. This is undoubtedly adding to the already strong demand for logistics and warehousing space.

Gross transactions in the Dublin industrial market exceeded 48,000 sq m in Q3, bringing total take-up in the first three quarters of the year to approximately 172,000 sq m. This is 22% lower than the 221,000 sq m of space taken in the same period last year and reflects an ongoing shortage of good quality modern premises throughout the Dublin region. Despite this supply constraint, activity in the opening nine months of 2017 is in-line with the long-run average of just below 180,000 sq m.

At 34% in Q3, sales continue to account for a lower proportion of transactions than in previous years. Under previous legislation, qualifying property assets bought between December 2011 and the end of 2014 could only be sold free of a capital gains tax (CGT) liability after a minimum holding period of seven years. To date, this has limited the volume of industrial properties that have been brought to the market for outright sale. However, Budget 2018 reduces this holding period from seven to four years meaning assets bought
in 2012 and the first 10 months of 2013 can now be immediately traded without a CGT liability. Going forward, this change should bring about an increased flow of freehold opportunities allowing previous years’ trend of sales generally outstripping lettings to begin reasserting itself.