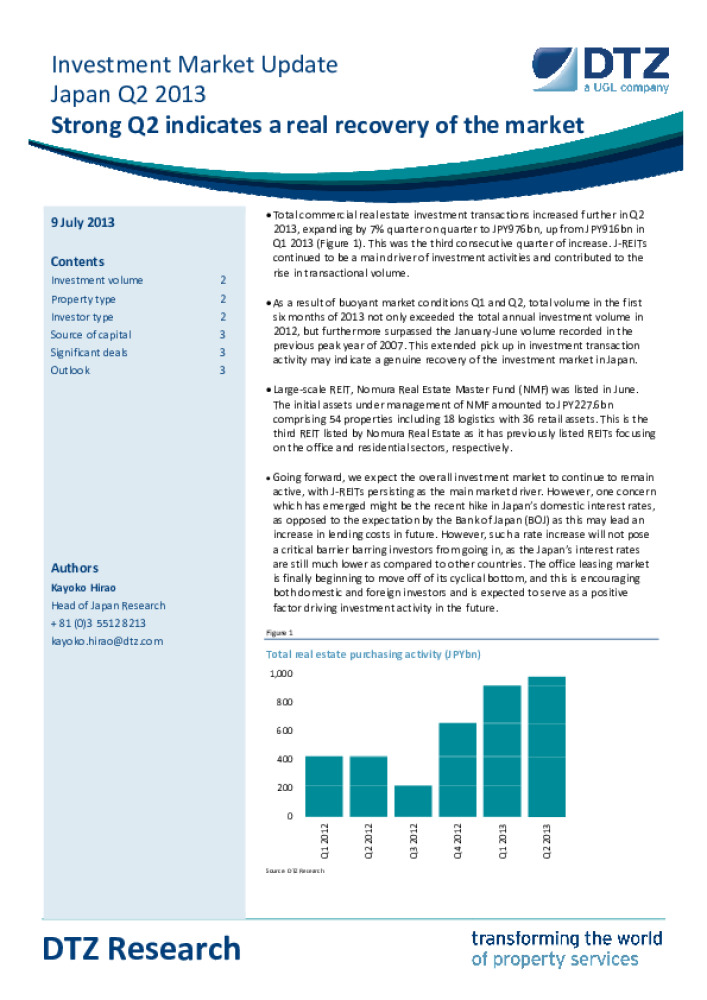 Total commercial real estate investment transactions increased further in Q2 2013, expanding by 7% quarter on quarter to JPY976bn, up from JPY916bn in Q1 2013. This was the third consecutive quarter of increase. J‐REITs continued to be a main driver of investment activities and contributed to the rise in transactional volume.

As a result of buoyant market conditions Q1 and Q2, total volume in the first six months of 2013 not only exceeded the total annual investment volume in 2012, but furthermore surpassed the January‐June volume recorded in the previous peak year of 2007. This extended pick up in investment transaction activity may indicate a genuine recovery of the investment market in Japan.

Large‐scale REIT, Nomura Real Estate Master Fund (NMF) was listed in June. The initial assets under management of NMF amounted to JPY227.6bn comprising 54 properties including 18 logistics with 36 retail assets. This is the third REIT listed by Nomura Real Estate as it has previously listed REITs focusing on the office and residential sectors, respectively.

Going forward, we expect the overall investment market to continue to remain active, with J‐REITs persisting as the main market driver. However, one concern which has emerged might be the recent hike in Japan’s domestic interest rates, as opposed to the expectation by the Bank of Japan (BOJ) as this may lead an increase in lending costs in future. However, such a rate increase will not pose a critical barrier barring investors from going in, as the Japan’s interest rates are still much lower as compared to other countries. The office leasing market is finally beginning to move off of its cyclical bottom, and this is encouraging both domestic and foreign investors and is expected to serve as a positive factor driving investment activity in the future.